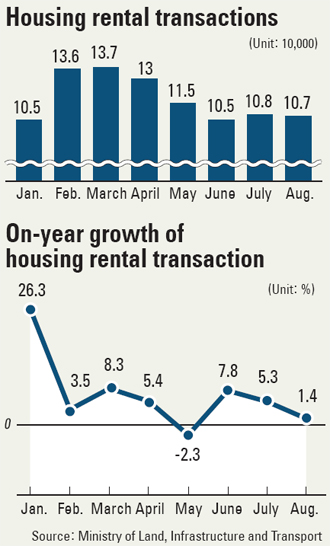 Although growth momentum has slowed, jeonse (two-year rent) and monthly rent transactions remained active compared to a year ago since last October.

According to the Ministry of Land, Infrastructure and Transport yesterday, the number of total housing rent transactions stood at 107,000 in August, up 1.4 percent from a year earlier and a drop of 1.2 percent month-on-month.

The growth was led by Seoul, where transactions jumped 6.2 percent. In particular, rent in the three most expensive districts of Seoul - Gangnam, Seocho and Songpa - surged 12.6 percent.

Total transactions in suburban areas of Seoul declined 2.3 percent year-on-year. Those in the rest of the country dropped 0.5 percent.

“It seems jeonse contracts are continuing to increase, since consumers are still doubting that home prices will rise again in the short term,” said a Land Ministry official.

The proportion of monthly rent transactions hit a new high of 33.8 percent in August. Prices of jeonse contracts for apartments in major residential areas of Seoul rose, too. A 76.79-square-meter (826.5-square-foot) flat in Eunma Apartments in Daechi-dong, Gangnam District, rented for about 332 million won ($309,000) on average last month, up 14 million won from July. A 84.99-square-meter flat in Ricenz in Jamsil-dong, Songpa District, was at 582 million won, up 25 million won from the previous month.

The ministry also revealed yesterday real jeonse prices of probably the most expensive apartments in the southern part of Seoul for the first time.A 245-square-meter unit at Tower Palace in Dogok-dong, Gangnam District, was traded at 2.7 billion won in July. The sale price of the unit is 4.25 billion won, according to the ministry. There were 11 jeonse contracts that exceeded 1 billion won in the capital until July, the ministry confirmed.