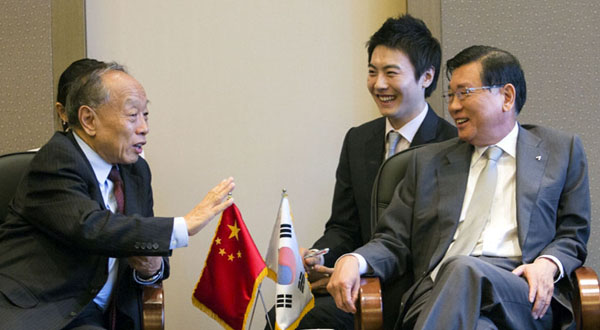 Normalization of Kumho Industrial, a de facto holding company for Kumho Asiana Group that is under a debt workout program, is speeding up as Chairman Park Sam-koo will return as board member and officially manage the company.

Kumho Industrial has been under a debt workout program, managed by creditors since 2010. However, the company on Monday opened a board meeting and decided to appoint Park as a member. The decision will be confirmed at a temporary shareholders’ meeting Nov. 5.

Although he wasn’t a board member and had no official title within the company, industry insiders said Park still controlled the company under a tacit agreement from the creditors.

However, with the official title, Park is expected to move to the forefront to normalize the group. The 68-year-old chairman reportedly agreed to forfeit his stake in the company if the corporate overhaul fails.

Kumho Industrial, which focuses on real estate development, had a capital impairment ratio of 89 percent as of the end of June. If the ratio exceeds 100 percent, the company will get delisted from the stock market.

To ease the situation, creditors recently came out with a normalization plan including a debt-to-equity swap. It targets converting 79 billion won ($73.5 million) worth of Kumho Industrials’ commercial paper held by affiliate Asiana Airlines into equity.

However, the plan created a controversy over whether the move violates a law that prohibits cross-shareholding between affiliates. Under the law, affiliates of conglomerates with assets of more than 5 trillion won can’t have each others’ shares.

Kumho Industrial currently holds a 30.1 percent stake in Asiana Airlines, and if the debt-to-equity swap is made the carrier would have a 13 percent interest in the builder.

However, Fair Trade Commission last week ruled that the case of Asiana Airlines and Kumho Industrial is an exception to the law, saying the purpose of the move is corporate restructuring and can be seen as “payment in substitutes,” not as a “set-off.”

Payment in substitutes means a debtor pays creditors by other means, instead of cash, while set-off means both parties agrees to erase mutual amounts owed. The law only allows the former method to be an exception to the cross-shareholding law, although Asiana Airlines needs to dispose of the shares of Kumho Industrial within six months.

Industry insiders say they will be watching Kumho Petrochemical, the second-largest shareholder of Asiana Airlines.

Kumho Petrochemical Chairman Park Chan-koo is a younger brother of Kumho Asiana Chairman Park Sam-koo, but the relationship between two has been strained since 2009 when the two fought over the group’s management.