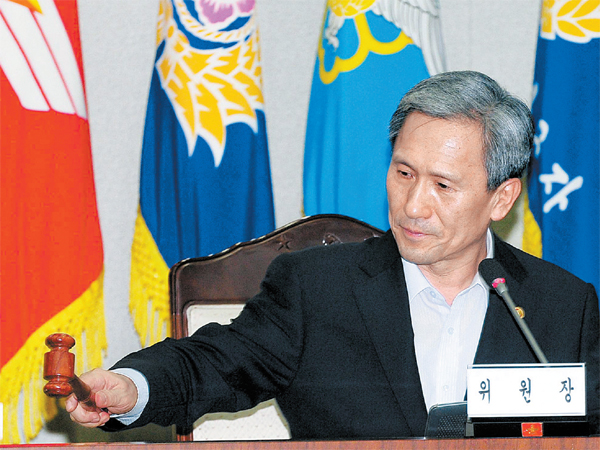 Minister of National Defense Kim Kwan-jin attends a meeting that postpones the purchase of a next generation of fighter jets, the nation’s largest acquisition program, yesterday at the ministry building in central Seoul. [NEWSIS]

The government yesterday postponed its decision on the winner of the nation’s largest defense procurement, dropping the only remaining fighter jet in the running, Boeing’s F-15SE, due to its unsatisfactory stealth features.

“Among the three bidders, the F-15SE remained the only finalist because it offered prices within the budget,” Baek Yoon-hyeong, a spokesman of the government-controlled Defense Acquisition Program Administration (DAPA), said yesterday.

“Based on evaluation of its mission capacity, prices and other characteristics, we discussed the current defense circumstances and operational conditions and finally decided the F-15SE is not fitted to [conditions].”

In January, the agency launched reviews of offers from the three bidders - Boeing, European Aeronautic Defense and Space Company NV (EADS) and Lockheed Martin. EADS’s Eurofighter and Lockheed Martin’s F-35A were eliminated in August as their prices exceeded the budget, reportedly about 9 trillion or 10 trillion won.

“Although the Air Force and the Joint Chiefs of Staff should restart everything from the beginning, we already have experiences in acquisitions, so we could save time,” Oh Tae-shik, director of the acquisition program in DAPA, said. “We will immediately restart the program to prevent the vacuum of the weaponry.”

South Korea was supposed to import the first fighter in 2017, but now it is expected to be delayed at least a year.

According to DAPA, four categories were considered when evaluating the bids - analysis of fighting simulations, maintenance costs, economic and technical benefits, and suitability to the South Korean military.

During the past 21 months of bidding, the top pick of the government and military was Lockheed Martin’s F-35A, which is the only jet equipped with high-end stealth ability. Boeing’s F-15SE also has stealth features, but they are partial.

A stealth jet can avoid radar detection through its shape or radar-absorbing paints. Stealth technology is being used not only in fighter jets but also for military choppers or warships.

On Sept. 15, 15 former Air Force chiefs of staff issued a joint statement recommending the government purchase a true stealth fighter, not the F-15SE.

“Stealth fighters are capable of secret missions, sneaking into the enemy’s territory,” the joint statement read.

They claimed the country needs a stealth fighter in case of war with North Korea.

There was speculation that the Boeing’s F-15SE would not be chosen because it is the oldest model among the three bidders.

But early this year, Boeing enhanced the abilities of the F-15SE to assuage the South Korean government. During President Park Geun-hye’s visit to the United States in May, Boeing also pledged to build an avionics maintenance, repair and overhaul center in South Korea.

While some Air Force officials thought the Boeing fighter was acceptable, others said it was not really a “next generation” fighter.

In June, Boeing became the last remaining bidder because it succeeded in meeting the budget limit after two months of negotiations.

Yesterday, the Defense Ministry launched a task force to restart the program. Kim Min-seok, the ministry spokesman, said there is a possibility that the government could expand the budget.

“The Ministry of Strategy and Finance said they can’t increase the budget for the program so far, but if we restart the project we may be able to expand it,” Kim said.

Kim added that the government could possibly consider purchasing two kinds of combat jets, not just one model.

The Air Force is hurrying the purchase of the new jets to replace its aging fleet. Air Force Chief of Staff Sung Il-hwan formally demanded a fast purchase at a National Assembly meeting in early September, saying, “We should not delay the acquisition anymore.” In July 2012, he even told a DAPA official, “Please buy anything, no matter what kind of plane it is.”

In July 2007, the military launched its plan at a meeting of the Joint Chiefs of Staff. After going through two audits by the government, the three bidders declared their participation in January 2012.

The final decision was supposed to be made in October 2012, but the Lee Myung-bak administration left it to the next administration.