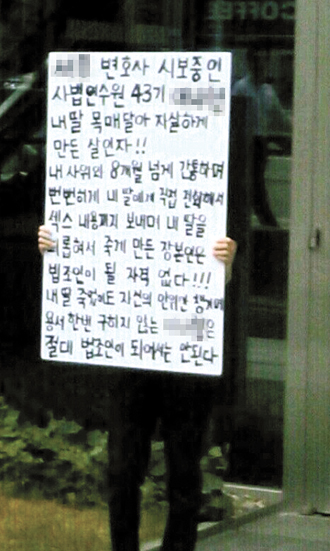 A woman protests before a law firm in Jung District, central Seoul, on Sept. 5, claiming her daughter committed suicide because of her husband’s affair with a fellow apprentice. [NEWS1]

The Judicial Research and Training Institute is ensnared in controversy after the two judicial apprentices - a 31-year-old married man and a 28-year-old single woman - were accused of driving the man’s wife to suicide.

Details of the messy family affair, including sexually explicit texts between the two apprentices and profane text messages from a mother-in-law to the suicidal wife, went viral, fuelling public intrigue and criticism of the cheating couple.

In response to the case, the state-run judicial body said Sunday that it begun an internal investigation.

If found to have been engaged in an inappropriate relationship, the two apprentices can be subject to corrective measures for violating the institute’s rules of decency for legal professionals. The punishments range from reprimands and salary cuts to ejection from the institute.

Bloggers and netizens are pressing the institute to cancel the apprentices’ licenses to practice law, but legal circles say that is unlikely.

Web users set up an online forum calling for tough punishment, uploading a stream of postings criticizing the cheating couple and demanding punishment.

They also left comments on the official Web site of the institute, which trains people who passed the bar exam.

The name and photos of the couple are circulating on the Internet.

The story of the love triangle was disclosed online by the mother of the dead wife. A photo of her staging a protest after her daughter’s July suicide in front of a well-known law firm where her son-in-law’s paramour was working as a probationary lawyer spread online.

The woman held a signboard that read, “You are not qualified as a lawyer because you are a murderer who made my daughter commit suicide.

“You have had an affair with a married man for more than eight months and devastated my daughter by sending texts about sex with my son-in-law to her.”

According to multiple local reports, the married couple had been together since college. Both of them prepared for the bar exam, but only the man passed.

Family members of the wife say that from the moment the husband passed the exam, his family began looking down on the wife and even demanded that she buy the couple a luxurious imported car and a house.

Meanwhile, the man allegedly pretended to be a single at the institute and the two legal trainees’ relationship was known to colleagues.