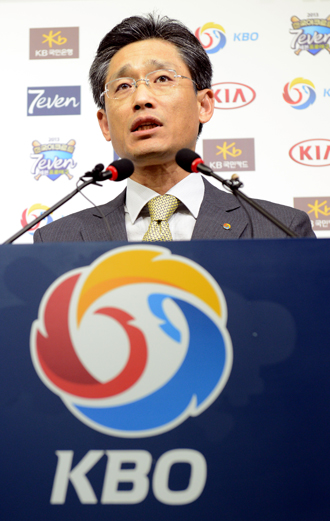 Yang Hae-young, secretary-general of the KBO, speaks about a proposed new baseball stadium for the NC Dinos. [NEWSIS]

Conflict has arisen again in the unified Changwon city government, composed of Changwon, Masan and Jinhae, over where to locate the city’s new baseball stadium planned for the NC Dinos baseball club. The Dinos, who are using Changwon city in southern Gyeongsang as their home, urged Changwon city government to build a new stadium in a better location after the Korean Baseball Organization (KBO) presented a study Tuesday that said the unified government’s plan to build a new stadium for the Dinos is not appropriate.

At Tuesday’s press conference, the KBO said the unified Changwon city’s plan to build a 25,000-seat baseball stadium in Jinhae should be reconsidered and that the city’s right to host the Dinos would be revoked if it doesn’t comply with the KBO’s request.

“The projected place in Jinhae can’t attract enough audiences because not many people live around the region and even the traffic system isn’t good enough to attract people in other regions such as Masan and Changwon,” said Yang Hae-young, secretary-general of the KBO.

In January, the unified city government designated Jinhae as the Dinos’ new home based on a study it did in 2011. However, the Jinhae site was ranked 11th in the report, which said the best site for a new stadium is near Changwon Sports Complex.

Because baseball experts and the Korea Professional Baseball Players’ Association (KPBPA) are opposed to the Jinhae plan, the unified city government restudied the issue and presented a new report, which differed from its 2011 version. In the new report submitted to the KBO in July, Jinhae was named the best site, though there weren’t any improvements.

“That report submitted by Changwon isn’t reliable,” Yang said. “The city government should consider changing their plan. If they accept our request, we can accept their plan of reducing the size of the ballpark.”

But Changwon said there will be no changes. “We can’t accept the KBO’s demand,” said Lee Yong-am, a spokesman for the city government.

“We believe what KBO says more than the city government’s report,” Bae Seok-hyun, general manager of the Dinos, told the JoongAng Ilbo. “We want them to revise the current plan because we still have time. Everyone including fans, players and reporters visiting the city for ball games know that the Jinhae site isn’t a good place to host a ballpark. Not enough public transportation system is provided in that region, and there is no plan to improve it.”

The KPBPA supported the KBO and the Dinos. “It seems like the host city is the only one who isn’t aware of what the problem really is for Jinhae,” it said yesterday in a press release. “Building such an expensive facility in a place where no one would visit will be a disaster because it will be an obvious tax waste.”