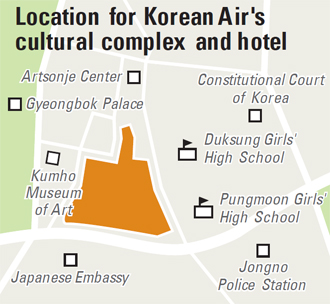 As part of efforts to boost investment, the government has eased a regulation on construction of hotels in the vicinity of schools.

The Ministry of Strategy and Finance reported to the president it will allow businesses to build hotels that have no unwholesome facilities near schools during the third trade and investment promotion meeting yesterday.

Currently, companies are required to win approval from a committee on school environment under the Ministry of Education to build hotels within 200 meters (656 feet) of schools.

With the increasing number of foreign tourists, the government is aware of the need for more accommodations and a lack of available land, especially in Seoul where there are more than 1,200 schools.

Since 2010, 58 hotel construction plans for Seoul failed to get approval from the committee.

Korean Air (KAL) will be one of the beneficiaries of the eased regulation.

The airline has been trying to build a cultural complex, including a high-end 156-room hotel, on about 36,000-square-meters (8.9 acres) of land near Gyeongbok Palace in central Seoul.

The company purchased the land in 2008 and asked for approval from the Jungbu District Office of Education in 2010, but was rejected since there are two girls’ high schools and a middle school in close proximity.

KAL even filed a lawsuit to withdraw the decision, but the court upheld the law.?

KAL airliner has been planning to invest 300 billion won ($278 million) in building a four-story hotel.

“We welcome the government’s announcement, but when we will be able to resume the stalled project isn’t?definite yet,” said a KAL spokeswoman.

By easing the regulation, the ministry expects about 2 trillion won in additional investment.

It has submitted a bill to reform the tourism promotion law, including the relaxed rule on hotels?to the National Assembly.?

The alleviated hotel regulation is part of the ministry’s goal of 5.7 trillion won in investment in the next four years.

The Finance Ministry also said it will provide incentives to construct an international theme park on Nami Island in Chuncheon, Gangwon.

It will build a bridge to connect the island with the mainland and lease the island to prospective foreign investors, including public utility services, at no charge.