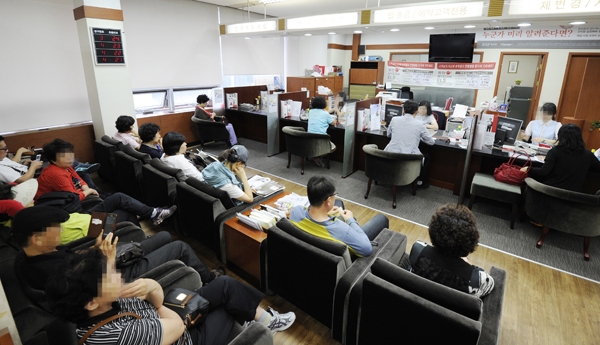 Clients waiting at the Tongyang Securities branch in Changwon, South Gyeongsang, yesterday. Since Monday, the brokerage firm’s customers have been withdrawing their investments on the news that Tongyang Group faces a liquidity crunch. Since Monday an estimated 3 trillion won has been taken out. [NEWS1]

A game company employee in his 30s, Jung recently became concerned over his broker Tongyang Securities as the group turns out to be in a liquidity crunch.

“It’s not a large amount, but I have some investment made through Tongyang Securities,” Jung said. “Should I pull everything out?”

Jung isn’t the only one feeling uneasy over recent developments at Tongyang Group.

Yesterday at a Tongyang Securities’ branch in Yeouido, in western Seoul, there was a notice posted on the door stressing that clients’ assets are protected. Yet people were lined up, waiting to withdraw their investments from the brokerage firm.

Although the mood was much calmer than on Tuesday, when there were lot more clients waiting in line, it was clear that fear was still looming, particularly among customers who invested in commercial paper (CP), which are short-term unsecured promissory notes.

“Wouldn’t I loose my investment in CP if the company goes bankrupt?” asked one of the clients waiting his turn.

Investors remained uneasy, although the Financial Supervisory Service and Tongyang Group tried to calm the situation by offering reassurances that their deposits, bonds and fund investments are protected.

“Stock investments made through Tongyang Securities have been placed safely at the [state-run] Korea Securities Depository according to related laws, while other investments such as equity-linked securities are managed separately from the company’s assets,” said Choi.

The governor warned that if customers cancel their investments before the due date, they might suffer more losses.

“Investors have been drawing a lot of their investments out yesterday and today,” said a Tongyang Securities official. “However, the money that the clients have entrusted with us is safely protected and will not be affected by our liquidity situation. The liquidity situation has brought a sense of uncertainty to our customers, but we hope that our clients are not influenced by it as we will do our best to protect the investors.”

Tongyang Group went on to say it could push a corporate restructuring that could involve selling its shares in several affiliates, including its energy company Tongyang Power.

After the news, the stock value of Tongyang Group, which has been tumbling for the past two consecutive trading days, rebounded slightly to close 1 won, or 0.12 percent, higher than the previous day at 814 won.

Even Tongyang Securities shares were up 0.91 percent to close at 2,770 won, while Tongyang Cement gained nearly 5 percent to 2,220 won.

If Tongyang Group sells all its stake in the power affiliate, it would be estimated to secure 1 trillion won.