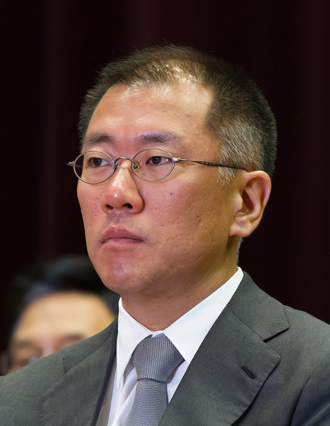 Hyundai Motor is pushing its business in Europe as Korea’s largest automaker started mass production of its new i10 city car yesterday in Turkey.

According to the company, ViceChairman Chung Eui-sun, the only son of Hyundai Motor Group Chairman Chung Mong-koo, flew to Turkey on Tuesday to check the production and sales strategy.

The new i10, which was unveiled at the Frankfurt Motor Show in Germany earlier this month, is expected to go on sale in November.

The second-generation city car has been tabbed as the automaker’s key weapon to expand its presence in Europe.

Previously, the i10 was manufactured only in India.

However, since the new i10 will now be rolled out at Hyundai’s plant in Izmit, Turkey, where it invested more than $600 million to expand production capacity by 60 percent to 200,000 vehicles per year, the automaker is expected to have more efficiency in logistics and sales. The Turkish plant previously manufactured only i20 models.

Its India plant, meanwhile, will produce the Grand i10, a slightly bigger version of the other i10s, that will be sold only in India.

Hyundai said it wants to increase the market share to 6.3 percent next year, with i10 annual sales reaching 74,000 units.

The model is expected to compete with the Volkswagen Up, Fiat Panda, Ford Ka and Citroen C2 in the segment.

After investing $33 million, Hyundai Mobis’ module plant went fully operational earlier this month. It manufactures chassis, driver’s seats and front-end modules for i10 and i20 models and will supply the products to the Hyundai Motor plant, which is just 1.2 kilometers (0.75 miles) away, as part of a just-in-sequence (JIS) logistics strategy.

“Hyundai Mobis’ entrance into Turkey is following the group’s strategy to increase sales in Europe and increase production efficiency on localized models,” said Hyundai Mobis Vice President Cho Won-jang, who is in charge of the module business, in a release.