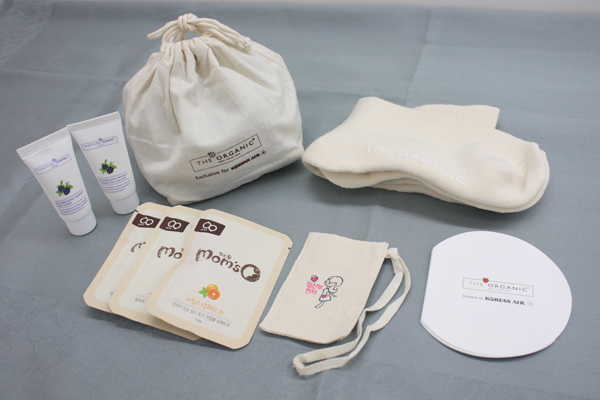 Korean Air’s new kit is intended to help ease travel a bit for pregnant women and mothers with young children. Provided by the company

In August, an 8-month pregnant woman traveled to Singapore with her husband for their summer vacation.

“A lot of my friends have been taking pre-birth travels with their husbands to purchase good quality baby products at affordable prices.”

Kim said she bought a bagful of baby clothes and visited Ikea, where she purchased a cradle and other items.

Like Kim, many pregnant woman in recent years have been traveling to nearby countries like Singapore several months ahead of their deliveries.

In response, airlines are reinforcing services for pregnant women and mothers with young children.

Korean Air Lines yesterday said it will provide amenity kits for all pregnant passengers on international flights departing from Korea starting next month.

The kits will include foot cream, skin care cream, sleep socks, tea bags and a bag tag. KAL said skin care products and socks are made of organic materials, while the tea, which helps to sooth morning sickness, is “The Organic” brand popular among young mothers.

“The bag tag is also included so other people can easily recognize that a passenger is pregnant woman,” KAL said in release. “We hope that the amenity kit helps to alleviate stress and fatigue for pregnant passengers during a trip.”

The affiliate of Kumho Asiana Group also has provided its “Happy Mom” service since 2009 for passengers with children aged 2 or younger.The airline provides exclusive counters, breast-feeding covers and baby slings, as well as child seats for those who buy tickets for infants.

The company said its 300 cabin crews completed enhanced training for the role during past two months.

An additional 60 will be trained in this month and 500 Flying Nannies, which will be identified by a bright orange apron, will be working on Etihad Airways long-haul flights by the end of the year, the company said.