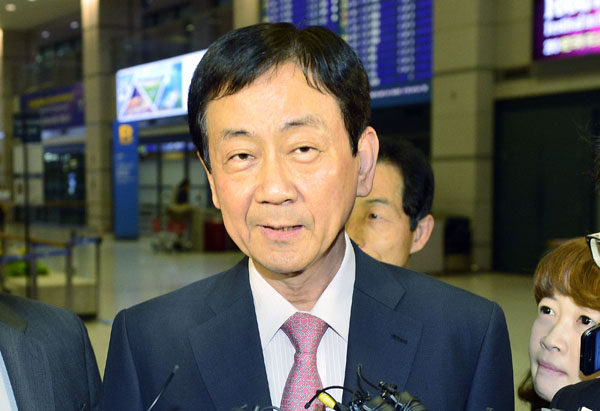 Minister of Health and Welfare Chin Young confirmed yesterday that he had told some of his acquaintances that he was considering stepping down and said he still plans to do so. Rumors sparked by a newspaper report on Sunday said that he might concede to mounting pressure to resign because of a failure to implement one of the Park Geun-hye administration’s key campaign promises concerning senior citizens.

“I thought resigning was my duty and responsibility for the nation and for the president, who entrusted me with the job,” he said in a brief meeting with reporters at Incheon International Airport early yesterday morning. He was returning from a business trip to Saudi Arabia amid speculation that his resignation could come as early as this week.

While confirming that the rumors were not groundless, the minister complained that the rationale for his departure had been distorted.

“It is true that I voiced my thoughts to people around me two weeks ago. But presidential campaign promises are not something that should be talked about by a minister,” Chin said.

He denied he was accepting responsibility for not being able to carry out the president’s campaign promise to offer a 200,000 won ($186) monthly pension payment to anyone age 65 or older. Budget problems have made that promise appear increasingly unrealistic. Chin was the architect of the president’s welfare ideas, including the universal basic pension plan.

He cited “a sense of helplessness” as key reason for wanting to quit.

“I was depressed when I saw that circumstances didn’t allow me to do well as welfare minister, although I tried to,” he said. “The budget is tightly controlled by the Ministry of Strategy and Finance and human resources by the Ministry of Security and Public Administration. I realized there is nothing the Welfare Ministry can do.”

He flatly denied speculation that he was stepping down to run in the Seoul mayoral election next year.

“That would be deceiving others as well as myself,” he said. “It is such a preposterous suggestion.”

The former judge has been considered one of the ruling Saenuri Party’s potential candidates to challenge the incumbent, Park Won-soon, who is expected to run for re-election.

The ministry is scheduled to unveil a revised plan for a basic pension today, and the new plan is expected to offer much less than promised earlier. President Park is scheduled to preside at a cabinet meeting today, a task usually performed by the prime minister, to discuss pension matters.