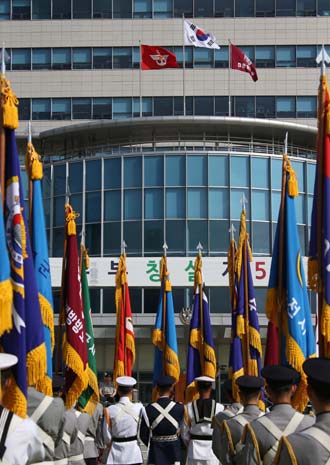 Honor guards stand yesterday at the military training ground in Yongsan, central Seoul, to commemorate the 50th anniversary of the establishing of the Joint Chiefs of Staff. By Kim Kyung-bin

In the first high-level military reshuffle by the Park Geun-hye administration, Adm. Choi Yoon-hee was named chairman of the Joint Chiefs of Staff yesterday, the first Navy chief of staff to rise to that position.

The elevation of Navy Chief of Staff Choi, 59, to chairman of the Joint Chiefs of Staff was a surprise because that position is usually occupied by Army chiefs. Choi will succeed Gen. Jung Seung-jo, who is completing his two-year term.

“As Gen. Jung Seung-jo’s term as a chairman of the Joint Chiefs of Staff expires,” the Defense Ministry said, “we have decided upon the military commander appointments.”

The Defense Ministry said that Choi’s appointment was due to his strategic prowess and took into consideration the rising importance of naval defense, especially in light of attacks from North Korea around the Yellow Sea’s Northern Limit Line.

The move is expected to also strengthen cooperation between the Army, Navy, Air Force and other military forces, according to military officials. Since its founding, the Joint Chiefs of Staff has been dominated by Army generals, with the exception of an Air Force chief taking the helm in 1993-94.

Choi, who is from Gyeonggi, began his military career at the Republic of Korea Naval Academy and was commissioned in 1977.

He was appointed the naval operations chief in October 2011 and promoted from vice admiral to admiral. Previously, he had served as vice chief of the Navy, superintendent of the Naval Academy, as well as a Blue House national defense officer. 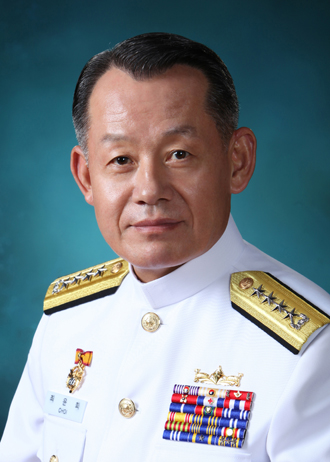 He is a recipient of the Order of National Security Merit, or the Gukson Medal, in 2010.

He was recognized for his leadership following the March 2010 sinking of the Cheonan warship, strengthening and stabilizing the Navy with internal reforms and boosting its combat readiness.

Though he is of relatively short height, standing at 165 centimeters (5.4 feet), he is noted for a gung-ho motto: “Height won’t beat me.”

The new Army chief nominee, Kwon, 58, graduated from the Korea Military Academy as a graduate in 1978 and previously served as commander of the 5th ROK Army Corps.

New Navy chief Hwang, 56, reportedly fluent in English and French, graduated from the Naval Academy in 1978 and has also previously served as head of the Defense Acquisition Program Administration’s naval weapons acquisition bureau and commander of the Republic of Korea Fleet.

Hwang has been lauded for successfully leading naval operations to rescue 21 South Korean sailors captured by Somali pirates in the Gulf of Aden in January 2011 when he served as chief of the naval operation command.

The appointments are expected to be passed by the Cabinet today for final approval from President Park.

Choi will have to undergo a confirmation hearing in the National Assembly next month. The ministry also said that Lee Young-joo, the Defense Ministry’s director of the Combat Readiness Inspection Office, was tapped to be commander of the Marine Corps to replace Lee Ho-yeon.