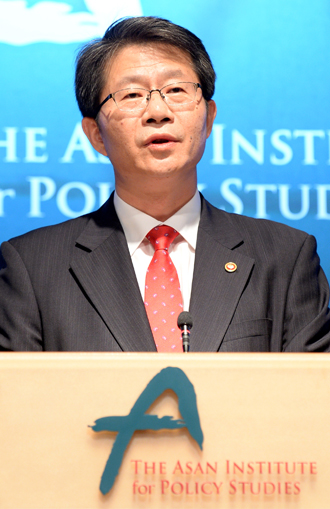 A Chinese expert on North Korea told a conference here yesterday that Pyongyang has not yet reached a level of technological sophistication that would allow North Korea to produce a nuclear weapon that could be mounted on a long-range rocket. For that reason, Li Bin said, the North will probably try to test more such weapons.

That assessment is seemingly at odds with recent estimates by South Korean and U.S. defense officials that Pyongyang will have that capability as soon as next year. But Li was not sanguine about what comes next in his remarks to the Asan North Korea Conference at the Asan Institute for Policy Studies; he teaches international relations at Tsinghua University.

“So my conclusion,” Li continued, “is that in the latest nuclear test they could not finish their tests for miniaturization. But they must have learned something, and now there is a chance for them to do more nuclear tests, [at least] one more, and it is important for us to stop them from doing so.”

Li said North Korea chose to test a miniature nuclear device in their first test, an option he called “risky,” because they couldn’t afford to conduct many nuclear tests and gambled that they could find a shortcut.

“Why did they choose the risky design rather than a conservative one?” he asked. “While other nuclear states have had time to do more testing to improve their designs, North Korea was not sure it could afford many nuclear tests. They did not know whether the political environment and the international community would allow it to conduct many nuclear tests.”

Li, who is also a physicist and a disarmament expert, said he assumes that North Korea has used plutonium in all three tests, not uranium.

“If they had used uranium, it would have been more difficult for it to do a job [of miniaturization],” he said. “That’s because a uranium bomb is larger than a plutonium bomb.”

Joshua Pollack, an American senior analyst at Science Applications International Corporation, introduced his recent report on the evidence supporting his contention that North Korea developed crucial nuclear weapons technology on its own.

“There are serious implications in the fact that North Korea now appears to be able to produce its own gas centrifuges without significant dependence on outside sources,” he said.

He added that between 1999 and 2003 North Korea imported the gas centrifuges it used, but there have been no signs that those imports of critical components continued after 2003.

“From 1999 through about 2003, the gas centrifuges were hard to make, and hard to find substitutes for,” he said. “But after 2003, these crucial imports ended. So you have to ask yourself - how could North Korea build gas centrifuges without importing sensitive technology from advanced countries? I believe the most likely answer is that they produced the necessary components and materials at home.”

And if that is true, Pollack argued, the current antiproliferation strategy being applied against North Korea, including UN sanctions that bar exports of sensitive materials to that country, may be misguided.

“If it is the case that North Korea already makes it crucial components inside the country, then current policies based on export controls and sanctions have probably reached the limit of their effectiveness,” he said.

“North Korea already agreed on key principles to end its nuclear weapons program by signing the Sept. 19 Joint Declaration in 2005,” the minister said. “In the Feb. 29 agreement with Washington in 2012, North Korea also agreed to take preliminary steps to resume the six-party talks But it unilaterally scrapped those promises.

“They broke deals unilaterally and have emphasized the importance of their nuclear arsenal in recent years,” he said. “In this situation, it is hard to trust that their policy goal, rather than just their public stance, is denuclearization.”