Riot police hang up their shields

Riot police hang up their shields 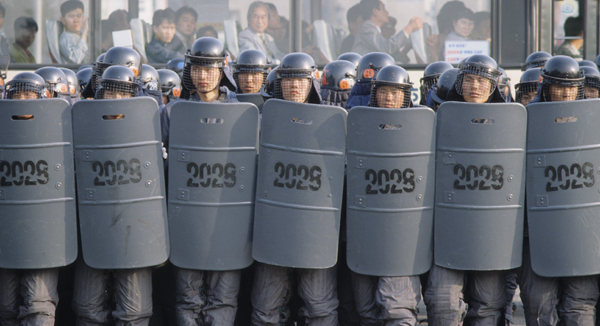 Scenes of riot police, as in this 1980s file photo, are no more. The last group of conscripted riot police finished their national service yesterday. [JoongAng Ilbo]

A riot police unit exclusively tasked with countering protest rallies during tumultuous times in the 1980s and early 1990s has disappeared into history. The last group of riot policemen, distinguished by their shields, padding and Darth Vader-style masks, was discharged from military service yesterday.

Formed in 1971, initially to counter North Korean infiltration attempts, the police unit was present at some of Korea’s historic moments of the period, most notably the suppression of the 1980 Gwangju Democratization Movement.

The shrinking pool of draft-eligible males was the main reason the unit was disbanded entirely. The calmer form of recent protests also made riot police less necessary than during the days when protests against strongman administrations here flourished.

In response to the new circumstances, the National Assembly voted to stop conscripting young men for the riot police as an alternative to military service beginning in January 2012. In the future, draftees who opt for a 21-month stint with the Korea National Police Agency instead of regular military service will be assigned to the remaining tasks the disbanded unit once handled.

In 1970, the rubber-stamp National Assembly of the time approved the formation of the riot police unit; the first members joined it the next year. Originally planned as an elite force to combat North Korean infiltrations, such as the 1968 raid on the Blue House by a team of 31 North Korean commandos, its mission gradually changed to breaking up (or at least containing) demonstrations by democracy activists and other dissatisfied domestic protesters. As the frequency and scale of such demonstrations increased, the number of troops assigned to the unit rose significantly, both in absolute numbers and as a percentage of the total police force. In 1982 there were just under 40,000 combat police, about 40 percent of all police. By 1987 their numbers had risen to 46 percent of the total force and more than 54,000 members.

During the 1990s their role dwindled, and by the late 1990s they were used primarily as visible deterrents outside government bodies such as the National Assembly, the Blue House, airports, the U.S. Embassy and American military bases. These police also supplemented regular neighborhood patrols when needed, police officials said.

The bulk of the guards’ eight-hour duty shifts consisted of standing around and occasional calisthenics to stay warm. Yesterday’s ceremony, attended by 183 riot policemen and senior police officers, was a tribute to the 320,000-plus riot policemen who had worked in the unit. “The riot police played an integral role in maintaining social order,” said Lee Sung-han, chief of the National Police Agency. “All the 320,000 servicemen will be remembered for their contributions and devotion for the society.”