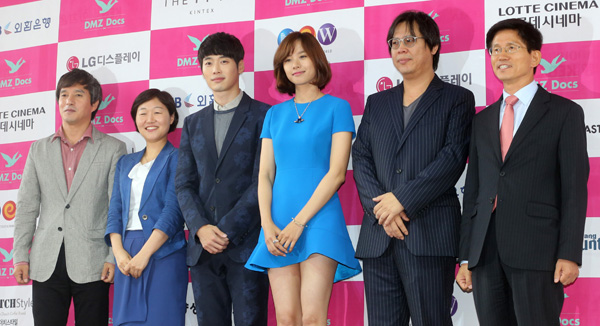 The DMZ Korean International Documentary Film Festival may not be in the Demilitarized Zone anymore, but organizers say the spirit of the eclectic event lives on.

After four years in Paju, the fifth edition of the festival has moved a bit closer to Seoul, to the city of Goyang in Ilsan, just to the northwest.

But DMZ Docs, as the festival is known for short, hasn’t completely left behind the buffer zone that separates the Koreas. The festival’s opening on Oct. 17 will take place on the former site of Camp Greaves, an American army base, just 2 kilometers (1.2 miles) from the DMZ.

It’s an unusual location to open a film festival, but actor Jo Jae-hyun, the festival’s executive committee head, says the spot is ideal for a festival that is “unfortunately political in nature.”

At a press conference on Tuesday, festival organizers said they were continuing to work on making DMZ Docs Asia’s biggest documentary film festival.

Kim Moon-soo, head of the organizing committee, emphasized how the festival’s goal first and foremost was to promote the reunification of the Koreas. He also said that he wanted to see more documentaries filmed in the landmark site.

“A man recently was shot to death trying to cross the border,” said Kim. “The DMZ is not just home to animals and vegetation, but is also the site of countless incidents that go untold.”

Head programmer Maeng Soo-jin, who sifted through some 600 works to make her selections, said that she was very proud of the festival’s lineup this year, which consists of 119 works from 38 countries - double the number that the festival started off with five years ago.

In the festival’s three competitive sections, there are 10 films in the International Competition, eight in the Korean Competition and seven in the Youth Competition.

The winner of the International Competition will take home 15 million won ($13,900), while the second-place jury prize winner will win 7 million won.

The best Korean documentary will be awarded 10 million won.

The festival’s opening film will be the world premiere of “Manshin: Ten Thousand Spirits” by Park Chan-kyong, an artist and filmmaker best known for being the younger brother of acclaimed director Park Chan-wook.

“Manshin” is an usual documentary-scripted hybrid, telling the life of female shaman Kim Keum-hwa, a woman who has been named an “important intangible cultural property.” Park said that Kim’s life represents the essence of the festival.

“She is from Hwanghae Province in the North, and she’s endured a lot of pain throughout her life as a shaman,” said Park.

Maeng said that this year’s opening film was significant because of the 60th anniversary of the 1950-53 Korean War.

Aware that some people regarded Park’s work as “not really a documentary” - it features actresses Moon So-ri, Ryu Hyun-kyung and Kim Sae-ron playing Kim Keum-hwa at various ages - Maeng said the work was a first of its kind.

“We normally talk about the content and form of a movie. In that respect, Park has always delved deep into that,” said Maeng. “I watched a 20-minute version of ‘Manshin’ last year and thought ‘this is it.’ Park’s movie is a documentary. It’s an example of how far you can take a documentary by fusing creativity.”

Through the festival, Maeng said she hoped to see Korea become a leader in the field of documentaries. And in order to help the cause, Maeng said that the festival has upped the Documentary Project Market fund for aspiring documentary makers, increasing the festival’s total support for filmmakers to 300 million won.

“I think Korea is heaven for documentaries,” said Park. “There are so many stories and changes taking place. But, despite this, there is not enough opportunities to come across them.”

Jo was also given an opportunity, making the trailer for this year’s festival himself - “because we had no money,” he said.