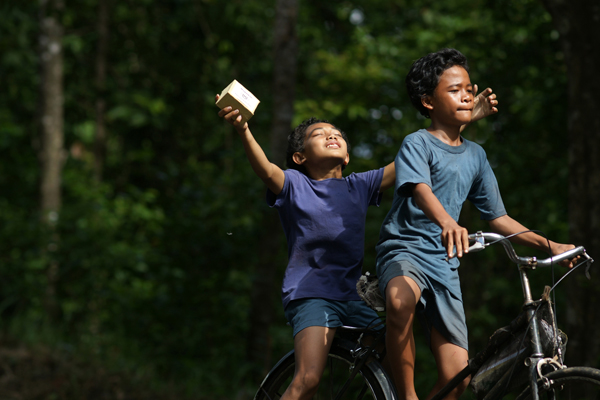 “Rainbow Troops” will be screened at the Indonesian Film Festival. Provided by the festival

The Indonesia Film Festival kicked off yesterday at the CGV Yongsan cinema in central Seoul, an event hosted by the Indonesian Embassy to mark 40 years of relations with Korea.

Hatta Rajasa, coordinating minister for the economy, was present for the opening event, as were Korean entertainers, such as Gi Tae-young, Bae Soo-bin, So Yoo-jin and Lee Jong-su, and a few Indonesian entertainers.

To inject some excitement, Eru, a Korean singer who is popular in Indonesia, performed alongside Indonesian actress-singer Atiqah Hasiholan.

This wasn’t the first time the duo collaborated, as both were in the film “Hello Goodbye” last year. Although he played a minor role in the film, Eru recorded the theme song “Black Glasses,” which was a hit in Indonesia.

The opening film for the festival was “Habibie & Ainun,” a hit from last year about the third president of Indonesia. The film was directed by Faozan Rizal, who was also in attendance.

To help Korean viewers ease into the world of Indonesian cinema, actors Prisia Nasution from “The Dancer” and Alex Komang from “9 Summers 10 Autumns” will meet with audiences today ahead of their films’ screenings.

Nine films will be showcased until Wednesday at CGV theaters in Yongsan and Ansan.