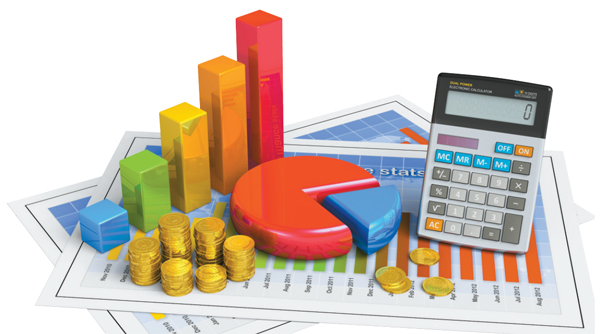 The government is in the painful process of trimming its campaign promises for welfare. Nonetheless, it plans to spend more than 100 trillion won ($93 billion) on welfare next year, a record amount.

The Ministry of Strategy and Finance announced yesterday a budget for 2014 with 105.9 trillion won in spending for the welfare, health and employment sector.

That is up 8.7 percent, or 8.5 trillion won, from this year and is the first time the welfare budget surpassed the 100 trillion won mark. It accounts for 29.6 percent of the total.

The total government spending for next year will be 357.7 trillion won, up 4.6 percent or 15.7 trillion won from the 2013 budget. It’s only a 2.5 percent increase from this year’s budget if the 17.3 trillion won supplementary budget made in April is included in the calculation.

The main focus of the 2014 budget plan is to revitalize the economy without threatening fiscal soundness, the ministry said. 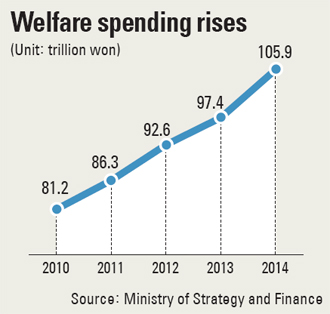 “The government’s fiscal conditions will remain adverse next year with falling tax revenue due to the prolonged economic downturn,” said Hyun Oh-seok, deputy prime minister for the economy and finance minister, at a press conference held in Sejong yesterday. “It is desirable to slash expenditures in accordance with revenue, but there is great need to maintain an appropriate level of expenditures to solidify recovery in the economy.

“So next year’s budget plan is aimed at maximizing expenditures while keeping an adequate level of fiscal balance,” the minister said.

The welfare spending may be a record, but it is less than what was expected when the Park Geun-hye administration first came into office. Park’s campaign pledges - including an expanded basic pension for seniors and halved college tuitions - would have led to a total annual welfare budget estimated at around 135 trillion won.

But some of those pledges have been cut back. During last year’s presidential campaign, Park promised a 200,000 won basic monthly pension to every citizen aged 65 or older.

Because of the prohibitive cost, the Ministry of Health and Welfare came up with a reduced plan yesterday: a 200,000 won monthly basic pension for most senior citizens in the lower 70 percent income brackets.

“Making economic recovery the top priority of the budget plan, we adjusted the welfare spending,” Hyun said, “But the government will carry out its pledges faithfully by securing as many revenue sources as possible by reducing tax exemptions and uncovering the underground economy.”

The Ministry of Education also decided to have further discussions on the best time to start slicing college tuitions in half, lessening the burden on next year’s budget. It could start from 2015, the ministry said.

The budget for the culture, sports and tourism sector is increasing 5.7 percent, and the public administration sector is rising 5.1 percent.

Opposition to some of those budget cuts from local governments might be inevitable.

“Spending on SOC next year is 23 trillion won, only about 1 trillion won less compared to this year’s budget including the supplementary budget,” said vice finance minister Lee Suk-joon at the briefing.

“It is deemed enough to boost the economy.”

The Finance Ministry drew up the budget based on the projection that the economy will grow 3.9 percent next year.

The expected fall in revenue means that the government’s coffers are shrinking amid persisting uncertainties in the global financial market, prolonged economic slowdown in various countries and decreasing tax revenue.

Since revenue is estimated to fall while spending rises, the country is likely to face a 25.9 trillion won fiscal deficit next year when non-budget items are added in, particularly the four national insurance schemes.

The total amount of national debt is forecast to spike from 480.3 trillion won this year to 515.2 trillion won, accounting for 36.5 percent of next year’s GDP.

For the next four years, the Finance Ministry said it will try to keep the growth of total expenditures at 3.5 percent annually, lower than revenue growth (5 percent), in order to secure a fiscal balance by 2017.

Some experts view the prediction as overly optimistic.

“If economic growth does not reach the anticipated level, another supplementary budget will be unavoidable,” said a research fellow at Hyundai Research Institute. “It would have been better if the government devised its budget based on the worst possible scenario.”

Another researcher at LG Economic Research Institute said, “The government should be aware of the fact that it could face a wider deficit than it forecasts if the global economy continues to recover more slowly than expected.”

In late 2012, the ministry forecast a 4 percent growth for this year, but annual growth is expected to be 2.7 percent, which led to the 17.3 trillion won extra budget in April. The government, however, has ruled out possibility of making another supplementary budget. “At the moment, it is unlikely to make a supplementary budget next year, because growth is forecast to improve from now on,” Lee said.