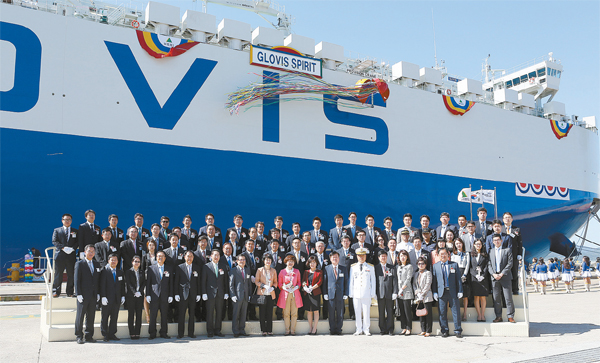 Officials from Hyundai Glovis and Hyundai Samho Heavy Industries pose in front of the Glovis Spirit yesterday. Provided by the company

The company yesterday named the ship the “Glovis Spirit” after receiving it from Hyundai Samho Heavy Industries’ shipyard in Yeongam, South Jeolla.

The craft’s 7,300 vehicle capacity is 800 vehicles more than regular PCTCs, according to the company.

The regular PCTC, known as a Panamax, is 200 meters (656 feet) long and 32.4 meters wide. It’s designed to fit through the Panama Canal, which is 33.6 meters wide. The Glovis Spirit has the same length as a regular PCTC at 35.4 meters wide, becoming world’s first post-Panamax vessel, Hyundai Glovis said.

The Panama Canal is being widened to 55 meters. The project is about 60 percent complete and is expected to be finished in the first half of 2015, according to Hyundai Glovis.

The company, which has concentrated on exporting vehicles from its affiliates Hyundai Motor and Kia Motors, said that it will expand its customer base because logistics demands are growing from other global automakers like Ford, Toyota, and Volkswagen.

According to the company, its vehicle transportation revenues from non-Hyundai companies have been increasing steadily. They accounted for 12 percent of total sales in 2010, 23 percent in 2011 and 31 percent last year. They are expected to reach 39 percent this year.

Hyundai Glovis said that it will take delivery of two more Post-Panamax PCTCs from Hyundai Samho Heavy Industries by the end of this year. Then Hyundai Glovis will operate 50 PCTCs.

“By operating large size PCTCs, we will have a competitive advantage against other global shippers,” Hyundai Glovis CEO Kim Kyung-bae said.