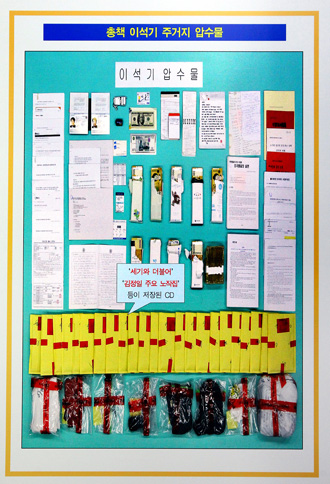 Articles confiscated from lawmaker Lee Seok-ki’s home were shown to the media yesterday by prosecutors indicting him for rebellion. [NEWSIS]

The prosecution indicted Representative Lee Seok-ki of the Unified Progressive Party for allegedly plotting a rebellion against the South Korean government by forming an underground organization, the first such antistate case in 30 years.

Kim Su-nam, head of the Suwon District Prosecutors’ Office, released an interim report to the media on the ongoing investigation into the alleged conspiracy to start an insurrection in case war with North Korea broke out.

It is rare for a chief prosecutor to give a briefing on an ongoing case.

“This case posed a grave threat to the existence and security of the Republic Of Korea through a plot to overturn the liberty and democracy of the country by a revolutionary organization armed with the Juche ideology,” Kim told a briefing yesterday. “We will strictly deal with this based on the law and principles.”

The chief prosecutor said they recognized all of the charges the National Intelligence Service claimed against Lee: Inciting and plotting a rebellion and praising the North Korean regime.

“Representative Lee Seok-ki of the UPP, as head of the RO (Revolutionary Organization), directed [his members] to prepare for a war,” the prosecutor said. “This is evidently a case of insurrection.”

According to the prosecution, Lee attended a meeting of members of the RO, ostensibly an alpine hiking club, on May 12 at a building belonging to a religious group in Mapo District’s Hapjeong-dong. More than 130 people were at the meeting, including Lee and nine other UPP members whose offices and homes were all searched by the intelligence service on Wednesday.

A transcript of that meeting released by prosecutors quotes Lee urging the RO members to arm themselves with explosives, including homemade pressure-cooker bombs, in order to drive U.S. forces out of South Korea and reunite the two Koreas by provoking a Communist revolution in the South.

“We have also some video evidence,” Cha Gyeong-hwan, a senior prosecutor at the Suwon office, told reporters at a press meeting. “But we can’t reveal them as we are still in process of indictment.

“If you read the transcript, they discussed highly feasible and threatening plans, which we can never see as a joke,” Cha said.

UPP Chairwoman Lee Jung-hee recently made the excuse that the comments at the meeting were a “joke.”

Still, in order to convict Lee, the prosecution must prove that Lee and his RO members had a detailed action plan for insurrection.

The report represented yesterday says Lee and his RO members support the North Korean regime, but it doesn’t clarify whether Lee indeed plotted a rebellion at a certain place and on a certain date.

Based on previous cases regarding insurrection plots, the judges recognized the charges only when “two or more people agreed to commit the crime and that agreement effectively presented a threat” to national security.

The prosecution also must prove that praising the North Korean regime by chanting its songs or possessing North Korean books or materials threatens the existence and security of the country.

According to the report, many RO members were former members of the National Democratic Revolutionary Party, or Minhyukdang in its Korean shortened form, an underground group formed by Lee in 1992. Most of its members were arrested in 1999 on charges of violation of the National Security Law, and Lee was sentenced to three years in jail on the same charges.

But after Lee was released by an Aug. 15, 2003 special pardon by the Roh Moo-hyun administration, he revived the party with a new name, RO. The prosecution report said RO members have made efforts to infiltrate civic groups and political parties for the past decade to prepare “a decisive moment for revolution.”

The RO members judged the “decisive moment” would come this year, the report said, assuming that North Korea would start a war. In March, North Korea issued a series of threats, raised its military alert to the highest level and declared it was scrapping the armistice agreement of 1953.

“The RO prepared for the ‘decisive moment’ of their revolution, and just like the Minhyukdang, they praised North Korea,” Suwon Prosecutor Chief Kim said. “Their creed was [North Korean founder] Kim Il Sung’s Juche ideology.”