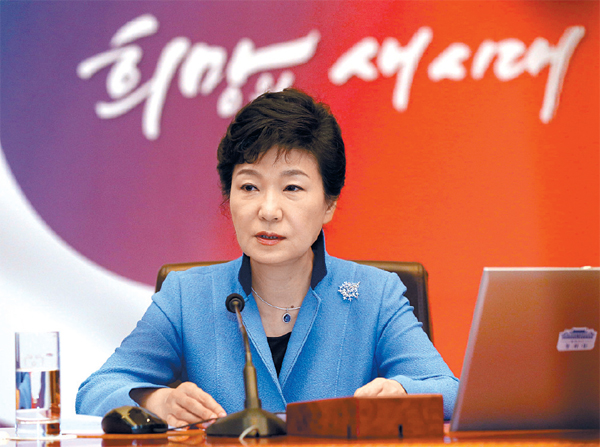 President Park Geun-hye presides over a cabinet meeting yesterday at the Blue House. She said at the meeting that she regretted not being able to fulfill one of her key campaign promises, to give a 200,000 won (186 dollar) monthly pension to all Koreans aged 65 or older. By Choi Seung-shik

President Park Geun-hye told her cabinet yesterday that she regretted not being able to fulfill one of her key campaign promises, to give a basic 200,000 won ($186) monthly pension to all Koreans aged 65 or older.

“I feel sorry that I failed to provide that to all of our senior citizens,” she said at a cabinet meeting at the Blue House that was largely devoted to laying out the government budget for next year. “But that does not mean I am giving up my campaign pledge. My belief that I should keep the promises I made to the nation is still strong. The majority of promises requiring funding have become part of the budget outline for next year, as planned.”

Park noted that some critics have pushed her to re-examine her campaign promises entirely, but she said that would not be a “responsible attitude for the government.”

She explained the budget situation and background behind remapping the universal basic pension plan in detail to the ministers; the text, some three pages long, was handed to reporters after the meeting. “[The decision] was inevitable,” the statement said, “given that shortage of tax revenue is unprecedentedly huge. For financial health, we should rein in spending in tandem with the slowdown in the global economy.”

Under the revised plan, a basic pension ranging from 100,000 won to 200,000 won will be given to all persons 65 years old or older starting next July, except for those in the upper 30 percent income level or people who own a home valued at more than 430 million won, regardless of their income. At the upper end of the eligibility range, the pension amount will be calculated based on whether and for how long the beneficiary has paid into the wage-based national pension system, which will also determine how large a pension they can expect. During the presidential campaign last year, Park promised to provide the pension in the first year of her inauguration, but that date is now set to be pushed back by at least seven months.

According to the Ministry of Health and Welfare, the potential recipients of the monthly allowance from the government, or bottom 70 percent of elderly income earners, will be defined by their monthly earnings for tax purposes. The formula combines the monthly salary from a job or business, minus 450,000 won in earned income tax, with financial and real estate assets converted into estimated monthly gains. Couples with a house worth over 430 million won in large cities be ineligible for the pension even if they have no cash income. The ceiling on home value drops to 300 million won for a single person.

Park stressed that the pension plan was not a gimmick to win voters. She had argued, she said, that the government should set up such a pension when she was a lawmaker with the Grand National Party, a predecessor of today’s Saenuri Party. But then in the opposition, she said she faced protests from the party in power at the time.

Her statement, a de facto apology, was made during the closed meeting and not to the public, and that stimulated her critics to question just how deep her commitment to the average Korean goes. The critics noted that her predecessors usually stepped in front of TV cameras to make a public apology about setbacks in vital issues. President Lee Myung-bak, for instance, apologized in public for failing to meet his 2007 campaign promise to build a new airport in the southeast.

The Democratic Party rallied in front of the National Assembly building in Yeouido, to condemn the President for failing to go through with a major campaign promise. The party chairman, Kim Han-gill, urged Park to carry out her campaign pledges “without making any more complicated excuses,” also advising the president to withdraw her plan to reduce taxes for the wealthy.

“Promises should absolutely be kept. If it’s acceptable for a candidate to break any promise, the next presidential race will again become a public lying venue, filling the country with distrust,” he thundered. On cue, his remarks were followed by a group chant urging the president to publicly apologize and to keep her promise.

Ahn Cheol-soo, an independent Assemblyman who flirted briefly with a run for the presidency against Park last year, also demanded a formal apology and told her to “seek understanding” from the citizens.

The opposition party dubbed the changes in the pension plan a “national scam.” Representative Yang Seung-jo, a member of the party’s health and welfare committee, said the government had “deceived millions of senior citizens.” About 3.5 million, or 60 percent of people 65 or older, will receive the pension, he said, but Park lied to the remaining 2.5 million. He was speaking at a solo press conference after the president’s statement was released. “Deceiving 2.5 million people could even be considered a historic scam,” he said.

The Saenuri Party fired back, saying the opposition’s condemnation was a “groundless political offense.”

“We have adjusted the campaign promise to find a sustainable level of welfare after taking into account the budget situation,” said Yoon Sang-hyun, the deputy floor leader of Saenuri. He said the government has been working since March with social organizations to build a consensus for an income test. “The consensus was that we could not be offering 200,000 won every month to such people as [Samsung] Chairman Lee Kun-hee,” he said.