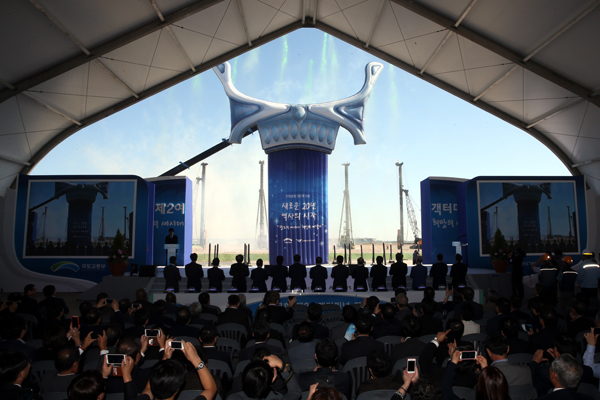 Guests record the scene on their smartphones at a groundbreaking ceremony yesterday for the second passenger terminal at Incheon International Airport. [NEWS1]

Incheon International Airport broke ground yesterday for the construction of a second terminal, which planners say will be necessary to meet future demand for travel.

The five-story passenger terminal, scheduled to be completed by 2017, will occupy 384,000 square meters (94.8 acres) and boost the airport’s annual handling capacity to 62 million passengers from the current 44 million a year.

The project’s timeline is geared to the 2018 Winter Olympics in Pyeongchang, Gangwon.

Along with 60 aircraft aprons and 20 cargo aprons and a 1.1-km (0.7-mile) link to the existing terminal, the new facility will have advanced systems for automatic boarding and a self-service bag drop system to shorten passengers’ check-in and boarding times significantly. A new parking lot will accommodate more than 5,000 cars.

The advanced features of the new terminal have led to competition to use the new venue by the two major Korean flag carriers. Only one of the two - Asiana Airlines or Korean Air - will be housed there; the airport authority was to have decided on the new tenant in February, but the decision has been delayed until 2015.

The airport authority said the expansion project is based on a low-carbon, green-growth policy to minimize harmful effects of construction on the environment.

Officials said the airport’s current capacity is beginning to pinch the steady increase in passenger numbers, both domestic and international. In addition to the new project, the airport authority said, a longer-term blueprint to accommodate up to 100 million passengers is being worked out.

“As we followed trends of the rise in demand, we were convinced that we will need to boost the handling capacity to 100 million by 2035,” said Lee Sang-gyu, the construction general manager at Incheon Airport.

Along with the new terminal, the airport operator also plans to build a casino, hotels, a recreation center and a shopping mall near the airport by 2016 to lure travelers using the airport.

That appears to be a bow to the increasing number of shopaholic Chinese travelers who are fattening the airport’s coffers. About 65 percent of the airport authority’s retail sales revenue comes from shops, recreational services, hotels and other businesses not directly related to air transportation.