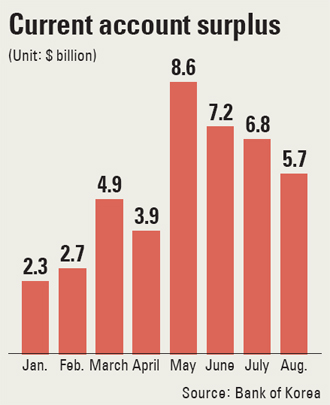 The nation’s current account posted a surplus for the 19th consecutive month in August, and the central bank remains confident the account balance - the total of the monthly surpluses - will easily reach $53 billion by the end of the year.

The Bank of Korea announced yesterday that the current account balance last month was $5.7 billion, compared to $6.8 billion in July.

“Although the surplus was smaller than the previous month, it was still larger than what we had expected,” said Jang Young-taek, head of BOK’s economics statistics department. “We won’t have any problems reaching our earlier projection.”

As of August, the current account balance was $42.2 billion, nearly twice the $22.4 billion surplus for the first eight months last year.

The central bank said import goods grew by volume, but value growth was limited largely because of lower prices for raw materials.

This contributed to a $5.3 billion surplus in the goods account, which was more than double the $2.5 billion recorded a year earlier but $400 million less than in July.

The service account recorded a $100 million surplus as the deficit from travel widened from the previous month.

The travel account showed a $1 billion deficit, compared to $840 million deficit in July. August is normally a part of Korea’s vacation period when many people travel abroad.

The deficit last month was even larger than last year’s $800 million. The service account balance in July had a $360 million surplus.

The financial account reported a net outflow of $7.7 billion, compared to a $7.3 billion deficit the previous month.