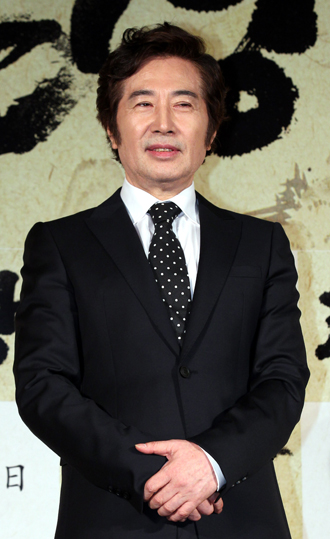 Only two weeks after it was revealed that veteran actor Baek Yoon-shik has a journalist girlfriend 30 years his junior, Baek once again is topping the entertainment news with his personal life. But this time, no one is quite sure what is happening.

The unnamed girlfriend, who is a reporter for one of the nation’s terrestrial TV channels, yesterday announced that she would convene a press conference to reveal “everything about Baek.”

The ominous-sounding press conference was to begin at 2 p.m. in Banpo, southern Seoul, but she decided to cancel the event just minutes before.

The girlfriend did not show up to the venue and no one gave a reason for the cancelation. Around 100 reporters who had gathered to hear her story left disappointed.

Baek has reportedly been out of reach since the girlfriend announced her plan to hold the press conference.

Baek 66, said he has been dating the reporter since June of last year. The two apparently grew close by talking about movies. The great difference in ages has been shocking to many of Baek’s fans, but apparently Baek’s friends and family were aware of the woman and supported the relationship.

The couple was outed after they were spotted together at a VIP screening of Baek’s latest movie, “Face Reader,” earlier this month.