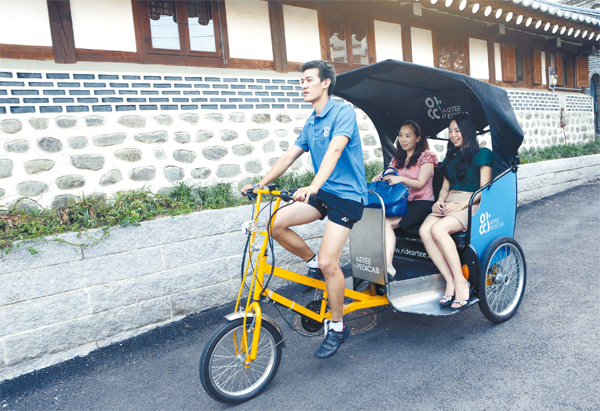 Lee In-jae giving a ride to two passengers on his Ride Artee pedicab around Bukchon in central Seoul. By Choi Jeong-dong

On a spring day in 2009, a young Korean student was pedaling a bicycle around the campus of the Wesleyan University in Connecticut. His bicycle, however, wasn’t like what the other students were riding - it had a wheelchair attached to it.

The student’s name was Lee In-jae. He had customized the bike himself, attaching a wheelchair to an ordinary bicycle so he could show off the beautiful campus to the chair-bound sibling of a good friend.

Although it was tiring work pedaling around the 360 acre campus, Lee says his heart leapt when he saw the joy it gave his friend’s brother.

Four years later, Lee is now 27 and is pedaling an unusual bicycle.

Now, however, he pedals around Seoul, and instead of a wheelchair he pulls a cycle rickshaw.

On the large awning at the back of the cart, a sign reads “Artee Pedicab” and “Ride Artee” - “Artee” coming from the pure Korean word atti, which means “an old friend.” After coming back to Korea, at first he worked for a foreign financial company. But it wasn’t his style, so Lee quit. Recalling the memory of pulling the wheelchair around Wesleyan, he decided to start a company, Ride Artee.

Unlike many of the pedicabs commonly found in tourist attractions in Europe and America, Lee’s rickshaw is operated by pure muscle power, no motor in sight. Since establishing Ride Artee in July 2012, he estimates his company has given rides to more than 5,000 people. And its popularity continues to grow fast. In May, he had 400 passengers, then in June he had 800. He started the company with two rickshaws but now operates six and employs 15 cyclists.

In May, his business received the grand prize in a competition for “creative tourism business model,” run by the Korea Tourism Organization.

Ride Artee offers two routes in central Seoul. The History Course takes passengers around historical attractions in Bukchon and Seochon, while the Samcheong-dong Romance Course is aimed at couples having a date around Samcheong-dong. Each route costs 25,000 won ($23) for adults and 15,000 won for students.

According to Lee, 20 percent of his passengers are visitors from abroad. Because he speaks English, Lee takes charge of foreign visitors.

But Seoulites are the main passengers of Ride Artee. “Seeing Bukchon from the rickshaw is a different experience,” said Park Ji-min, 28, who tried Lee’s rickshaw late last month. “It’s a special experience, as you can look around and hear secret stories from the riders.”

“I felt like I had to get a job that my parents wanted me to get rather than what I wanted,” said Lee. “It was a debt of gratitude as I knew that my parents had to toil to send me abroad to study.”

While the life of an office worker in a business suit wasn’t that bad, said Lee, one day, while he was looking out a window at Deoksu Palace in central Seoul, he suddenly remembered pulling his friend’s brother around campus. That’s when he realized what he really wanted to do.

At the time, Lee had already been to all the palaces and museums in Seoul, and he started to grow unhappy with the lack of things to do and places to go.

“Going around the royal palaces was fun for the first one or two days,” Lee said. “But I wanted to find a different way to enjoy Seoul. Then I noticed that no one had yet started a rickshaw business here. I thought if I do it, it’ll be more valuable. I didn’t start off thinking I’ll make it big and promote Korea and Korean history through this business. I just wanted to do what I really wanted to do.”

Together with an American friend, Lee gathered 10 million won to start the business. They got themselves an office in a semi-basement garage in Wonnam-dong in Seoul, close to Changdeok Palace, but soon ran into a very basic problem - how to find a rickshaw in Korea? No companies make them here, so he was forced to bring in two from abroad.

Next they needed to find customers. Lee says at first Koreans eyed the rickshaws warily, not being familiar with the mode of transportation. So Lee offered free rides to the elderly in the historical neighborhood of Bukchon, people who were just taking a stroll around the neighborhood. The residents in Bukchon soon took notice of Lee’s rickshaw and began to spread the word. Lee’s partner had to go back to his country after a short while, but Lee managed to grow the business on his own. Now, Lee is even called “the mascot of Bukchon.”

Lee says what he values most about his rickshaw business isn’t the business but the chance to tell and hear stories.

“I remember giving a ride to a mother and a daughter from Switzerland,” he said. “They were Korean-Swiss, and the mother booked the rickshaw saying she wants to surprise her daughter by showing her around central Seoul as a birthday gift. After the ride, the mother handed me 1,000 Swiss francs [$1,100]. I was really shocked, but she told me that she wanted to thank me because she had had many quarrels with her daughter while they were travelling in Korea, but they were able to resolve it through talking to her daughter while on the rickshaw ride.”

Lee is planning to expand his business to other parts of the country. It’s his goal to have a franchise of rickshaws, like the pedicabs of New York and Boston.

Lee says his goal is to “enjoy life.” “I want to do what I want to do and enjoy it,” said Lee. “In that sense, driving a rickshaw is great. I just enjoy driving it, and at the same time I happen to be earning money.”