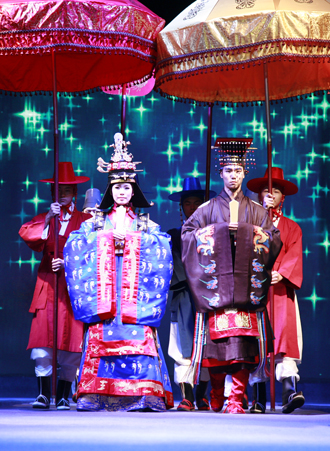 Sungshin Women’s University hosted a joint fashion show with Hebei University of Science and Technology on Wednesday, to celebrate the launch of a fashion design major at the Chinese school. The department was created as part of the Chinese government’s efforts to introduce the curricula of foreign universities.

Students of the two universities put their graduation projects on show; Sungshin put on five stages with themes including the Joseon Dynasty, hanbok, or traditional Korean outfits, and formal dress, and Heibi showcased on three stages with the themes casual, art and sportswear.

Ji Weige, secretary of the Hebei University of Science and Technology party committee, said this joint project will contribute to Sino-Korea cultural exchanges as well as the interaction between the two schools.

Hebei University of Science and Technology’s fashion design department receives 100 students, who are given the opportunity to study at Sungshin for a year. Those who meet certain criteria can earn double degrees by studying at the two schools for two years.

“Both Sungshin and Hebei will be your strong supporters. Dream high, and take on the challenge,” said Sungshin Women’s University president Shim Hwa-jin, addressing the freshmen at the fashion show.