Painter finds his calling only after turning 60

Painter finds his calling only after turning 60 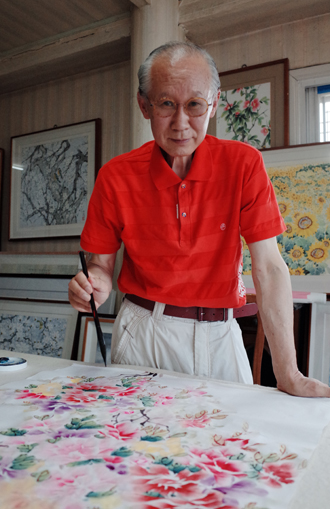 Ahn Chang-soo, a 68-year-old painter, working on a painting in his studio. Unlike most artists who pursue their careers from a young age, Ahn only started painting after he turned 60 years old. By Han Young-ik

Ahn Chang-soo, a 68-year-old painter, has a unique history. Unlike others who develop their artistic careers from a young age, Ahn discovered his talent and started pursuing his path as a painter when he was 60 years old.

“I lived all my life as a banker and I picked up the brush at the age of 60,” Ahn said, in a recent interview with the JoongAng Ilbo at his small studio in Yangsan, South Gyeongsang. The room was filled with the scent of paper and paint. “Ever since, I often spend more than 12 hours a day just painting.”

Ahn added that sometimes he cannot even bend his thumb because he held the brush for so long. Often his waist and back hurts, too.

“But I am always happy because of the dream I have to become the best,” he said.

Until his retirement from the company where he had worked all his life, Ahn lived honestly as a company man. He studied economics at Yonsei University, then entered the Export-Import Bank of Korea, where he was in charge of research and providing financial aid to other countries.

Back in the 1980s, when he was with the state-run bank, he had to get permission from the government to travel. Ahn recalls that he visited Africa five times because of work.

“I was often tasked with visiting other countries, so many of my friends and families were jealous of me, although it was a headache having to bring everyone exotic presents,” he reminisced.

In 2004, Ahn went to the countryside of Yangsan after retiring and decided to learn calligraphy. It was the first time he had picked up a brush, and soon his study of calligraphy turned into an obsession for painting.

“This one time, I happened to be at an exhibition full of paintings of chickens, and it prompted me to paint a chicken of my own simply because I was born in the year of the chicken,” he said. 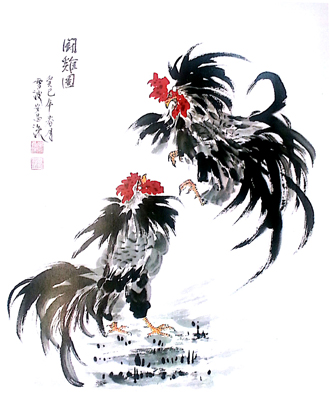 A painting of two roosters cockfighting that Ahn painted in 2013. By Han Young-ik

“My colleagues from the calligraphy class I attended at the time complimented my drawing and that’s when I had the idea to start painting.”

Ahn may have wanted to study painting, but there wasn’t anywhere to go in Yangsan at the time. But a friend of his who teaches art at a university proposed that he go to China to study painting.

He immediately packed a suitcase and headed to Hangzhou, a place known in China for oriental painting, to attend a private painting class.

“At first, I wasn’t able to understand a word, so I grabbed a fellow Japanese student who was attending the class and bought him lunch,” he said. “I asked him to translate, and that’s how I was able to communicate with the teacher.”

For two years, Ahn never returned to Korea and did nothing but study painting in Hangzhou.

Not knowing enough Chinese to order food, he even lost 10 kilograms (22 pounds), but he just kept painting. When Ahn became sick, his wife Kwon Min-ja, now 64 years old, flew to China with a bag full of medicine for him.

After two years in China, Ahn went to the Kyoto University of Art and Design to study more. All told, over his time in China and Japan, he received about 10 prizes and held five private exhibitions.

“When I studied as a young student, I had felt a limit no matter how hard I studied,” he said. “But now I feel I’m improving.”

Ahn said that although he first started out of curiosity, he hopes he will be able to share his paintings with other parts of the world, like the United States and the United Kingdom.