Minister of welfare tries to resign but is rejected

Minister of welfare tries to resign but is rejected 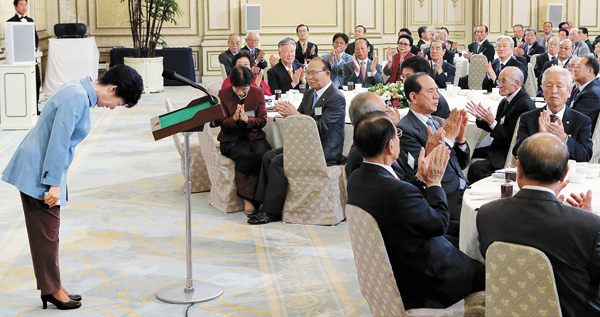 President Park Geun-hye bows to apologize for the watering down of her senior citizen pension campaign promise at a luncheon with members of the Korean Senior Citizen Association, who were invited to the Blue House yesterday to mark Senior Citizens’ Day. [NEWS1]

Minister of Health and Welfare Chin Young, who authored many welfare campaign pledges for President Park Geun-hye, submitted his resignation from the cabinet yesterday to take responsibility for the dropping of the most expensive promise.

But the Blue House said the president instructed Prime Minister Chung Hong-won to reject the resignation.

“The new administration’s first plenary session is ongoing, and we are also ahead of the parliamentary inspection,” Chung said in a press release yesterday. “I can’t accept his resignation in this critical time.

“I hope Minister Chin will do his job until the plenary session ends,” Chung said.

Sixty-three-year-old Chin sent unexpected e-mails to reporters yesterday, expressing his intention to step down and saying the decision was a bitter one.

“Bitterly feeling responsibility as the health and welfare minister, I will resign,” Chin said in the e-mails. “I feel sorry for causing concern to you and send wishes for the health of the people in the country and the success of the Park Geun-hye administration.”

Chin’s resignation came a day after the president offered a formal apology to her cabinet for failing to fulfill a key campaign promises to give a basic 200,000 won ($186) monthly pension to all Koreans aged 65 or older. The pension will only be given to the neediest seniors.

On Tuesday, during an official trip to Saudi Arabia, Chin denied the rumor that he was considering resigning. But he said at the time that he “felt frustrated as the welfare minister.”

He is also rumored to be preparing to run for the mayor of Seoul next year.

“I wanted to do lots of things, but the budget is held tightly by the Strategy and Finance Ministry, and recruitment is controlled by the Safety and Public Administration Ministry,” Chin told reporters on Tuesday in Saudi Arabia. “There was nothing for the Health Ministry to do.”

President Park bowed her head to apologize for the dropping of her senior citizen pension campaign promise at a luncheon with members of the Korean Senior Citizen Association yesterday.

She had been criticized the day before for apologizing to her cabinet but not to the public at large.

“I feel really sorry for the situation in which I had to inevitably revise the initial plan for providing pensions to all of you,” Park told the luncheon guests yesterday.”

“Still, it is fortunate we can provide 200,000 won pensions to 3.53 million underprivileged seniors starting next year,” she said. “If our fiscal condition improves and there is public consensus, I will expand the support for those in the top 30 percent income bracket.

“I will dedicate all of my efforts to resolving the issue of Korea having the highest level of poverty among seniors in OECD countries,” she said.

Chin, a former judge and lawyer, started his political career as a legal advisor for Grand National Party presidential candidate Lee Hoi-chang in 1996. In 2004, he moved to Park’s inner circle as the chief secretary of the GNP.

But Chin frequently clashed with Park’s core supporters and defected from the pro-Park faction of the conservative party in 2011.

He returned to Park’s inner circle last year, selected as a policy maker for the December 2012 presidential election.

After Park’s victory, he was named vice-chairman of her transition team and was put in charge of her welfare policies.

Ruling Saenuri Party members struggled to calm public anger about the reduced pensions and the walking away from an election promise.

“We sincerely apologize to those who are not benefitting from this pension program,” said Choi Kyung-hwan, Sanuri floor leader, at a party meeting yesterday. “However, although the opposition party is arguing that everyone in the country is losing, in fact, there is not a single person who is losing anything.

“If she thought she could deceive the public with sweet lies ahead of the election, she is indeed a bad president,” Kim said at a party meeting yesterday. “If she abandons all her pledges, it means she’s abandoning all the people who trusted her and voted for her.”