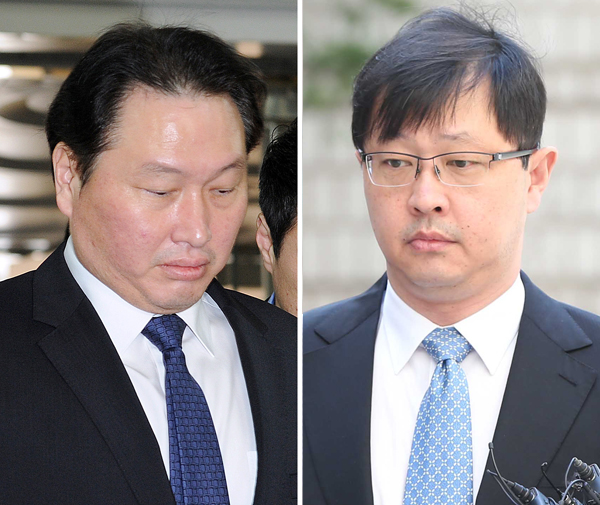 A Seoul appeals court yesterday handed down severe verdicts to the brothers who run SK Group, the country’s third-largest conglomerate.

The Seoul High Court yesterday upheld the four-year verdict given to the 52-year-old chairman by a lower court back in January for embezzling 45.1 billion won ($41.8 million) from two SK affiliates for personal investments.

It overturned the lower court’s acquittal of Jae-won, 50, in January, finding him guilty of colluding with his older brother in the embezzlement.

The bad news for SK, which has been without a chairman for almost a year, did not stop there.

Jae-won was sent to prison right after the verdict was read.

“The court is ordering the immediate arrest [of Jae-won] in consideration that he might flee,” said the judge at the end of a two-hour deliberation yesterday.

“I was not even aware of this scheme before the investigation .?.?. [and] I will not flee,” said the 50-year-old Chey, dressed in a formal black suit, when asked if he had any comment before being sent to prison.

The older Chey was seated next him in prison uniform before a three-member bench of judges.

Earlier yesterday, the defense team requested new trials for the cases after Kim Won-hong, former advisor to SK Shipping, was extradited from Taiwan on Thursday.

The two brothers say he is guilty of the embezzlement they have been convicted of and that a trial of Kim will prove their innocence.

The court rejected the request, saying it had collected “sufficient testimonies and evidence” on the case without Kim’s.

The court also questioned the credibility of the former adviser as a witness, saying his record shows he is a manipulative person willing to deceive others for personal gain.

“I have no clue as to how the chairman of the country’s third-largest conglomerate could have used so much of the company’s [embezzled] money for personal investments just because he was told to do so by Kim,” said presiding Judge Moon Yong-seon.

“An ordinary person would not understand why SK (referring to the defendants) trusted such a man so much,” Moon said.

In the course of his appeal, the chairman said he had lost 600 billion won to Kim.

The court said the defendants may have been deceived by Kim in their investment scheme but that they must have known they were embezzling the company’s money.

The judge also chastised the brothers for attempts to destroy evidence in the case during the investigation, saying SK Group officials tried to get rid of computer files.

“I have to question if the defendants thought they could distort the truth and whether they have respect for the country’s legal system and for the rule of law,” Moon said.

The judge said the brothers showed no remorse, reminding the packed court room that Tae-won was once convicted of breach of trust and was pardoned in 2008.

The appellate court continued its stern treatment of conglomerate families for criminal offenses.

Kim Seung-youn, a 61-year-old tycoon of Hanwha Group, the country’s 10th largest chaebol, was convicted of embezzling Hanwha affiliates’ money to pay back debts for companies secretly run under borrowed names. He received a jail term of three years in April.

The Supreme Court on Thursday ordered a review of Kim’s verdict in a lower court and sent it for retrial.

In the past, business tycoons in the country usually received suspended jail terms as recognition of their contributions to the national economy.

An official at SK Group told the Korea JoongAng Daily that the highest court’s ruling was a “shock” the company did not expect.

“We expected a lighter sentence than from the lower court in January and hoped the court would postpone the verdict since Kim Won-hong is now in the country,” he said.

“There is no reason for the chairman to have embezzled corporate funds. They were deceived by Kim.”

The official said the group will take steps to appeal the ruling to the top court.