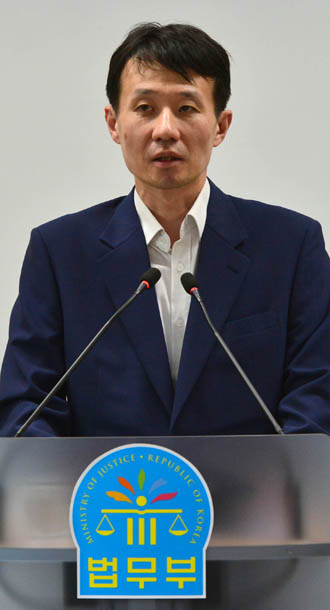 Hwang told the president that the resignation would end the paralysis in the prosecution that has resulted from the scandal.

The ministry released some of the results of its investigation into whether Chae did indeed father a son with a woman in Busan, who later moved to Seoul.

“Prosecutor-General Chae frequently visited a restaurant in Seoul and a cafe in Busan, both of which were run by the woman surnamed Im,” Cho Sang-chul, a spokesman of the Ministry of Justice, told a briefing yesterday. “In 2010, the woman visited his office when he was the chief of a prosecutors’ office, identifying herself as his wife.

“But he refused to meet with her,” he said. “She told other workers at his office, ‘This is not a matter he can escape from. Please tell him to call me.’ Her comments provoked suspicions about their relationship at the time.”

According to the ministry, Im abruptly left her house in the very early hours of the morning on Sept. 6, just hours before the Chosun Ilbo published its exclusive report on the alleged affair between Chae and Im and the son they allegedly had together.

The spokesman said the ministry confirmed that she rushed to leave her house and vanished.

“We have testimony and evidence from many witnesses, which are enough to assure us that all the suspicions could be true,” Cho said.

Chae did not cooperate with the ministry’s internal probe, Cho said. His plight has paralyzed the prosecution from functioning, he said.

On Sept. 6, the Chosun reported that Chae had an illegitimate son who was born after an extramarital affair in 2002 with a restaurant owner. The conservative newspaper reported Sept. 9 that Chae’s name was on the child’s school records as his parent.

The 54-year-old top prosecutor has tendered his resignation, but the Blue House didn’t accept it. The Justice Ministry launched an internal probe on Sept. 13.

Chae has sued the Chosun Ilbo, demanding a correction, and publicly said he would take a DNA test to prove that he doesn’t have a love child.

Reports have blamed the Blue House for leaking news of the alleged love child to the Chosun because it was angry at Chae’s aggressiveness in investigating charges that the National Intelligence Service intervened in President Park Geun-hye’s favor during last year’s presidential campaign with an online smear campaign against her challenger.