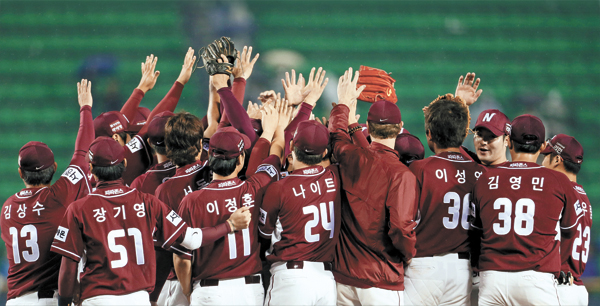 Nexen Heroes players celebrate their first trip to the postseason after beating their Seoul rival, the LG Twins, 4-0 on Saturday at Jamsil Baseball Stadium in eastern Seoul. [NEWS1]

All four teams that will compete for the 2013 Korean Series title of the Korean Baseball Organization (KBO) have been decided, as the Nexen Heroes cliched the final spot Saturday by upsetting the LG Twins, 4-0.

Infielder Kim Min-sung led the team’s victory with a three-run home run in the sixth inning.

Earlier last week, the Doosan Bears also made it to the playoffs, where the defending champion Samsung Lions will battle for another KBO championship. Standing in Samsung’s way are the three Seoul teams, including the LG Twins, who will be making their first postseason appearance in 11 years.

In the fourth inning Saturday, Nexen’s Kim hit a sacrifice fly RBI after the bases had been loaded on two hits and a walk to slugger Park Byung-ho. 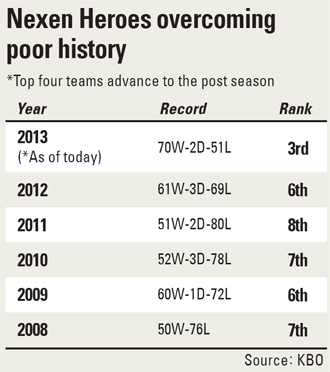 Then in the sixth inning, Kim crushed a curve ball from Twins starter Radhames Liz over the left center field wall with two on and one out.

Nexen lefty Ben Hacken shut out the Twins for seven innings, allowing two hits and a walk while striking out five to earn his 12th win of the season. Reliever Song Shin-young and closer Sohn Seung-rak pitched the eighth and ninth innings.

Sohn recorded his league-leading 44th save.

The Heroes have a record of 70 wins, 2 draws and 51 losses with three more games to play in the regular season.

The Heroes were established in 2008 and this was their first postseason appearance.

Analysts said the leadership of Yeom Kyung-yeop, the 44-year-old Heroes manager, made the team a contender. Since he was named manager before the season, he tried to make the team stronger especially in offense. But he didn’t rely only on some sluggers like Park and shortstop Kang Jung-ho. He utilized some the speed of second baseman Seo Geon-chang and others to become more aggressive on the bases.

“Because we can’t play baseball alone, everyone on the field should contribute their skills to the team’s victory, not only in hitting, but also in base running and in defense,” Yeom said. “I told my players to focus on basic things.”

Yeom considers himself an “adviser” to the team. “All I had to do was give my players more confidence,” he said, adding that because the club had never advanced to the postseason he wanted to rid his players of all the losing histories.

“Young players these days just don’t take coaching staffs’ advice if they think that advice isn’t effective for them,” Yeom said. “We need to prove that such advice is worthy.”

He didn’t hesitate to put new faces on the roster. When a player hit well for days, he consistently put him in the lineup, showing anyone could be a starter whether or not they are highly paid.

Under such leadership, last year’s regular season MVP Park leads the league with 35 home runs, his career high in a season, and infielder Kim Min-sung also is having his best season with 15 home runs and 70 RBIs with a .289 batting average in 122 games.

August and September were the two worst months for the Heroes in the past, but they were 11-11-1 in August and 14-4 in September.

The Doosan Bears had a tough season with many injuries, including shortstop Sohn Si-hun and key pitchers Dustin Nippert and Jung Jae-hun.

“Sohn will be back on the roster this week,” said manager Kim Jin-wook. “Having Sohn on the field will stabilize the team’s defense. And because Nippert is already back in good shape, I think we will be fine in the postseason because our hitting is the best in the league.”

Doosan leads the league with a .288 team batting average. Four players, including star left fielder Kim Hyun-soo, are hitting over .300 batting average and infielder Lee Won-seok is supporting them, hitting .299 in the sixth or seventh spot in the order.

“If Lee can hit just like he did in the regular season and catcher Yang Eui-ji supports in the bottom of the lineup, we will be a very strong team,” said Kim.