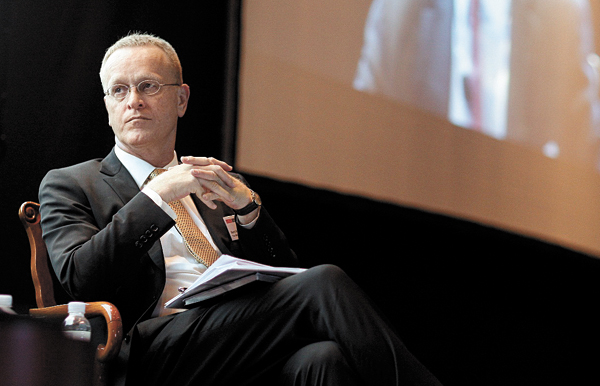 The global conversation about the Fed’s “tapering,” its eventual winding down of its stimulus of the U.S. and world economy, has been a good rehearsal for when it finally takes place, and now countries understand better the type of problems that may occur, said Bert Hofman, the World Bank’s chief economist for the East Asia and Pacific region.

“What we have seen over the last couple of months is a general rehearsal [for when the United States cuts its bond-purchasing program] because it didn’t happen yet,” Hofman said. “The talk already triggered a reaction in capital flows, and I think the authorities are now fully aware of it.”

Hofman, who is based in Singapore, was in Seoul last week to attend the Bellwether Series conference put together by the Economist magazine at the Grand Hyatt Seoul last week. The theme of this year’s conference was “Asian Finance: Credit Where it’s Due,” and it brought together over 140 participants including Korea’s top policy makers, business leaders and finance experts.

Ever since May, uncertainty has been reigning the global financial market after the United States Federal Reserve signaled its intention to cut back - or “taper” - its massive monthly purchases of long-term bonds. It has yet to do so.

Q. How would you evaluate the overall global economy?

A. I would say that we’re in a turning point. We’re seeing recovery in developed economies. Europe is pulling itself out of recession, and the growth rates in the U.S. are starting to firm up. For Japan, the first round of so-called “Abenomics” seems to have made a positive effect given Japan’s recent past. That’s positive. Then there are a number of risk factors. The first is the tapering of the quantitative easing. It’s important because a lot of liquidity that was created through quantitative easing, not just in the United States but also elsewhere, has flown into Asia, and the end of that quantitative easing will have an effect on global capital flows, and therefore will have an effect on Asia as well. I would really want to emphasize that tapering may cause volatility in the short-run, but if tapering happens, fundamentally it is a good sign. It means that the U.S. economy is recovering, and people are finding more jobs, and that the U.S. has started to spend again. That would be good for Asia.

Do you think Asia is ready for the tapering?

All the authorities are fully aware, and if we look at [past] reactions to tapering, it’s done very well. Indonesia, for example, recovered quite quickly from some of the outflows, and it took the right policy measures. I think the authorities have learnt from the past. They learned from 1997-98 [the Asian financial crisis], when there was a very different situation. There were domestic problems that caused capital outflows. They’ve also learned from 2007-2008 [the global financial crisis], in which there were outflows that were flights to safety. And now, the global economy is recovering and there’s a little bit of outflow. It’s a much more manageable situation than in 2007-8 and in particular 1997-98. The authorities have experience in managing very difficult situations.

What about volatility in the Asian financial market?

It needs to manage the volatility that might happen because of capital outflows. But then a little bit of weaker currencies for Asian countries is probably good. Six months ago, we talked about too much upward pressure on currencies because of capital inflows, so taking away a little bit, that won’t hurt, and it will make the Asian economies more competitive. Also, [eventually] it means more demand from the U.S. because it’s recovering and this is good for the Asian economies that are more open. But in the meantime, Asia needs to manage that volatility, it needs to make sure that its banking systems are safe, that there’s not too much exposure in currency mismatches and that banks and corporates can actually withstand some increase in interest rates and some weakening of currencies.

Regionally-speaking, what may be a concern about Korea?

China is gradually going into a phase of lower growth. As China gets richer, its growth will slow down. We’ve seen that in Korea, we’ve seen that in Japan, and it’ll happen in China. China is an important market for Korea. Another potential downside for the region is the depreciation of the yen. That makes a bit harder for competitors of Japan to export to the same markets that Japan is exporting to.