When it comes to tax burden, it’s about perception

When it comes to tax burden, it’s about perception 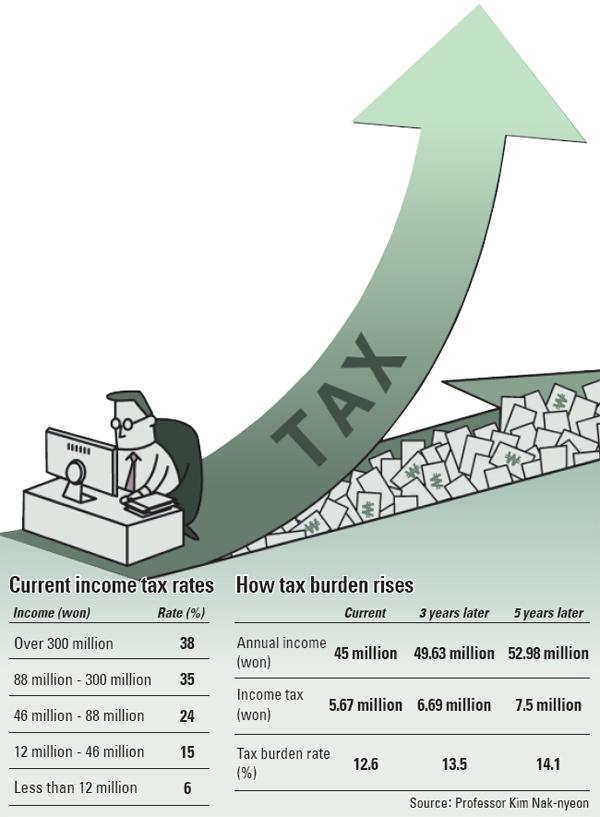 A company employee whose annual salary is little more than 80 million won ($74,500) receives 1 million won to 2 million won in tax refunds each year.

After getting some tax credits, the actual amount of taxable income of the employee was about 45 million won in 2008. But that amount had increased to 52.98 million won last year.

The increase indicates that his income rose 18 percent to 79.8 million won over the past five years. Actually, the employee, who is a breadwinner for a household with two daughters and a wife, doesn’t feel much change in his income. During the same period, consumer prices jumped 3.3 percent annually.

However, he did feel like he was paying more taxes. The employee paid 5.67 million won as income tax in 2008 and 7.5 million won last year.

Some consider this natural as income rises, but in terms of the tax burden to income ratio, the hike in income tax doesn’t make sense, the employee said. His tax burden rose from 12.6 percent to 14.1 percent during the same period.

Adjusted for inflation, Koreans are finding the actual amount of their disposable income unchanged for the past few years. However, since nominal income figures have been climbing, people have to pay more taxes, according to Kim Nak-nyeon, an economics professor at Dongguk University. Kim plans to present his research results at a forum next month.

“Under the current progressive taxation system, tax rates are rising every year as nominal income keeps increasing along with inflation, pushing the minimum level for taxable income to higher levels,” Kim said.

In the economics field, such a phenomenon is called “bracket creep” of the minimum level of taxable income, Kim said.

“The government has been lowering tax rates since 1980, but if you look at statistics for income taxes paid, individuals’ tax burden rates have been consistently rising,” Kim said.

Both the National Assembly and taxpayers have been ignorant of the increasing tax burden, he added.

“When the government recently intended to reduce current tax credits in order to effectively increase taxes, tax resistance occurred among the general public because they have long been accustomed to cutting taxes,” Kim said.

He said the government has been pretending as if it is benevolently reducing tax payments for the people by giving tax credits for the past three decades.

Another problem is unfairness in the increased tax burden, the professor said.

Kim said that since those in the top class already pay income taxes at the highest rate, there is no higher level that makes them pay more under the current tax system. In a nutshell, ordinary employees have been paying increasing taxes, while the rich were not.

“It is natural that as the economy grows, income tax payments rise,” said an official at the Ministry of Strategy and Finance. “An increasing tax payment means that somebody’s tax burden is rising,” Kim said. “The bigger problem is that the growth in the burden is not fairly shared among different income classes.”

“When the government and politicians consider tax increases, they shouldn’t overlook this issue,” Kim said. “Hidden tax increases are in violation of the rule of taxation.”