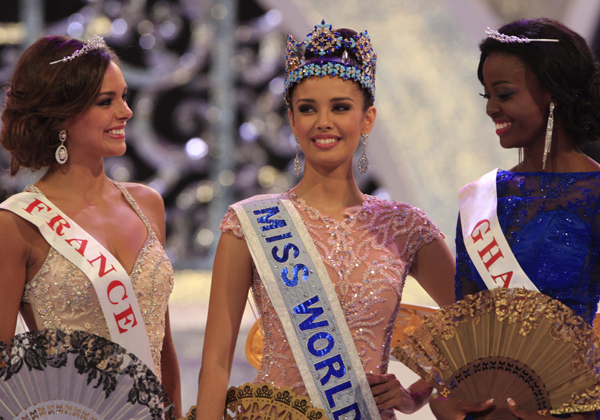 “I promise to be the best Miss World ever,” said Young, 23, after winning the 63rd annual event, as a large number of Filipino fans who traveled with her celebrated by jumping and waving the country’s flag.

Despite threats from the Islamic Defenders Front to disrupt the contest, police said no rallies were staged Saturday. The group has demonstrated for weeks, calling for the government to cancel the pageant because members say it shows too much skin and goes against Islamic teachings.

The 127 contestants vying for the crown were introduced Saturday wearing evening gowns shimmering in sequins, many of them with plunging necklines and slits up the leg. Four candidates dropped out earlier, mainly due to illnesses, said Syafril Nasution, one of the local organizers. 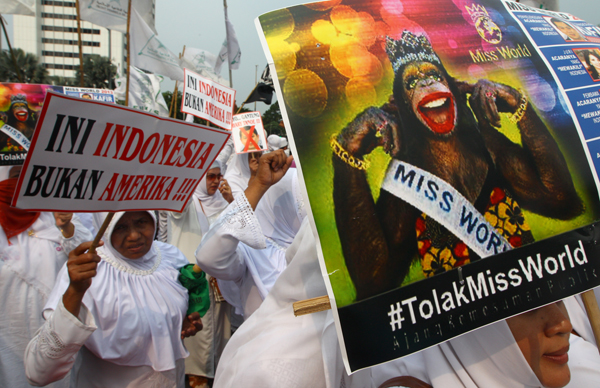 In a Sept. 6 photo, Muslim women hold posters reading “Indonesia is not America” and “Reject Miss World” during a protest in Jakarta demanding cancellation of the pageant. [AP/NEWSIS]

Young, who took the crown from Wenxia Yu of China, the 2012 winner, was born in the United States. When she was 10 she moved to the Philippines, where she has appeared in films and as a television host.

Miss World organizers had earlier agreed to cut bikinis from the swimsuit competition, replacing them with more conservative sarongs. But pressure continued, and more mainstream groups joined in and called for the show to be banned.

Indonesia’s government announced three weeks ago that the final would be moved from the outskirts of the capital, Jakarta, to the Hindu-dominated resort island of Bali, where earlier rounds were taking place.

The British, Australian and U.S. embassies issued warnings to citizens planning trips to Bali during the competition, saying there could be large-scale protests or even attacks.

Col. R. Umar Faroq, the director of vital security for Bali provincial police, said thousands of security forces had been deployed to secure the final.

But Faroq said security was tightened along the north coast of East Java to Bali in anticipation of possible protesters from other islands.

“The success in securing the Miss World final will be a benchmark for the police in securing the incoming APEC Summit,” Faroq said, referring to the upcoming Asia-Pacific Economic Cooperation summit on Bali to be attended by world leaders, including President Barack Obama, and thousands of delegates.

Miss World is the latest controversy in Indonesia, the world’s most populous Muslim country, where most follow a moderate form of the religion. However, a small extremist fringe has become louder and more violent in recent years, attacking Christians and other religious minorities, along with anyone else deemed immoral.

Last year, the Islamic Defenders Front forced Lady Gaga to cancel a sold-out show after branding her a “devil worshipper.”

In 2002, Bali was the site of suicide bombings that killed 202 people, mostly foreign tourists. Since then, the government has aggressively pursued militant groups, which in recent years have committed much smaller-scale attacks mainly focused on security personnel.