Reaching to past, communities find a future

Reaching to past, communities find a future 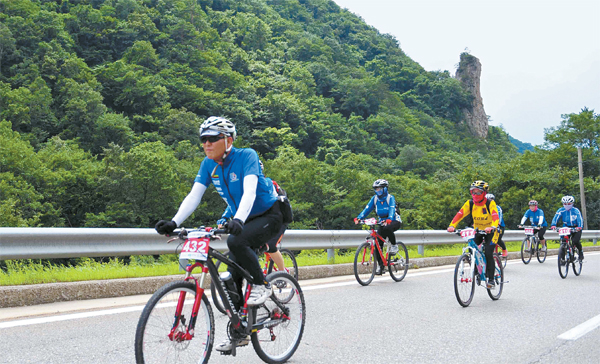 INJE, GWANGJU - Desolated old roads, exhausted mines and closed railway lines have one thing in common: They were crowded with people in the past but are forgotten now. Glorious places became ruins. But they don’t have to stay that way. Communities throughout Korea are revitalizing such places by turning them into new tourist attractions. For example, cycling competitions are being held on old roads and a former coal mine was transformed into a museum.

The strength of old places lies in unique and familiar memories that can be turned into amusing stories for visitors. Moreover, the legacies of previous generations are protected by restoring structures and facilities.

In other countries, projects such as the museum Tate Modern in London, England, have succeeded in using old places to attract tourists. A thermoelectric power plant next to River Thames was transformed into a museum in 2000. Tate Modern drew 5.3 million visitors last year, which ranks No. 4 among museums worldwide. Elsewhere, the Zollverein Coal Mine in Essen, Germany, was converted into a museum.

In Korea, an increasing number of local governments are turning local culture and nature resources into new tourist attractions.

The Old Misiryeong Road connects Goseong County’s Toseong-myeon and Inje County’s Buk-myeon, which is in Yeongseo County and Yeongdong County in Gangwon, respectively. Embracing Inje’s Baekdamsa and Goseong’s Cheongganjeong, the road itself was considered as a tourist spot. However, the number of tourists fell drastically when Misiryeong Tunnel was built in 2006. Even during the peak season, fewer than a thousand cars pass by each day. Nearby merchants were also upset.

Recently, more than 800 bicyclists assembled for the “2013 Misiryeong Dorumuk (sailfin sandfish) Hill Climbing Competition” on Misiryeong Ridge. The competition took place along a 10-kilometer (6.2-mile) section between Inje’s Yongdaeri and the top of Misiryeong (elevation of 826 meters, or 0.5 miles).

“I used to pass this winding road with my car when I was young. Viewing the scenery while cycling makes me think of old times,” said Choi Su-nam, the eldest of all the participants.

Using this competition as an example, Gangwon will begin holding cycling competitions on old roads throughout the province.

“Gangwon will turn into a leisure heaven for sports at all seasons with old roads and forest roads,” said Choi Gwang-cheol, the vice mayor of Wonju, who led the competition as chief of Gangwon culture, sports and tourism.

The cultural art complex Samtan Art Mine in Jeongseon, Gangwon, is a transformation of the former Samcheok Coal Mine that operated from 1964 to 2001.

The land and subsidiary buildings were transformed into a cultural art complex at a cost of 12 billion won ($11 million) since 2009. The original mining infrastructure was renovated, but the original building frames remained. Exhibition halls replaced the employees’ shower facility and toilets. Repair factories were converted into a restaurant that is enjoyed by couples and families. An art playground and exhibition hall were also added, as was a winery that uses a horizontal pit within the mine, a rare attraction in Korea. Fifteen thousand people visited in three months after its opening in May.

“The keywords of Samtan Art Mine are trace and revival,” said Kim Jin-man, an official from Samtan Art Mine. “We will contribute in making Jeongseon the cultural city of Asia by searching for creativity from its abandoned past.”

Gwangju Metropolitan City built Puren-gil Park along a closed section of the Gyeongjeon railway line (from Gwangju Station to Dongsung Middle School) by investing 27.8 billion won since 2002. The park is 7.9 kilometers long by about 113,000 square meters. People can appreciate nature and leisure in the park with various trees planted around the railway. Local artists drew hundreds of frescoes and a multinational company also provided support. Pernod Ricard Korea, the global alcohol company, created an urban farm that’s about 200 meters from the center of the park. Now, Puren-gil Park has become a tourist attraction that draws an average of 30,000 visitors a day.

“From a long-term perspective, land value goes up when there is a good park around,” said Gwangju Mayor Kang Un-tae.

Kang pledged to put Puren-gil Park on par with cycling routes in Bordeaux, France, and Creeper Trail in Virginia, a 56-kilometer trail that runs along a railroad right-of-way and passes through a national forest.

The Jung District Office in Daegu Metropolitan City provides “Alleys Exploration to Modern Times” tours through old housing alleys. Unique stories from the history of each structure in the alleys were discovered and publicized. For example, the “Missionary Switzer House” is a house south of Dongsan hill where Martha Switzer and other foreign missionaries lived in the early 1900s when Christianity started to spread.

The popularity of the alleys has boosted the number of tourists and local store sales, which have increased 30 percent to 40 percent compared to 2010. The Ministry of Culture, Sports and Tourism and the Korea Tourism Organization nominated the region for its “2012 Korean Tourism Awards.”

The alleys project started in 2010 with one course and grew to five courses, ranging from 700 meters to 10 kilometers in length. The project, which aims to link about 1,000 scattered and unpaved alleys, is ongoing.

Symbolic architecture will be established on Eupseong Street, where only the name remains from demolition in the early 1900s. Hanok, or traditional Korean houses, on Dongseongno and Seoseongro streets will be transformed into guest houses to form a hanok village.

Goesan County, North Chungcheong, has also developed a tourism resource with its Old Sanmaki Road, a 4-kilometer walking path along Goesan Lake that was rebuilt along the old mountain path that existed before the Joseon Dynasty (1392-1910). Next to the wood-deck road along the river, about 30 attractions were added, including dolmen (portal tomb) areas, a loving tree and pine tree hill. The results were astonishing. The number of visitors rose from 880,000 in 2011 to 1.32 million last year and the land value of Chilseong-myeon in Goesan, where Old Sanmaki Road is, rose 17.91 percent since last year, the sharpest rise in North Chungcheong.

Jeonju, an area well known for its hanok village, is in the midst of rediscovering Hubaekje (later-Baekje) history. Seven million people visit the village each year, but Jeonju is only recognized as a Joseon Dynasty-centered culture region. It announced a “Hubaekje Culture Creation 900” project in July to re-explore the Hubaekje Dynasty (892?936). Donggo Mountain Fortress, a palace built by Gyeon Hwon, who established later-Baekje, will be renovated until the end of next year.

Festivals that are named after great men or festivals with local traditions have also come into the spotlight. The Wando Changpogo and Jinju Namgang Yudeung festivals are tourist attractions that even attract foreigners.

But the efforts of local governments don’t always translate into successes. Despite huge budgets and massive renovations, efforts can be perceived as failures if the number of tourists don’t meet expectations.

Other plans fail to come to fruition. During former Mayor Oh Se-hoon’s administration, Seoul announced a plan to close down a building owned by the Korea Electric Power Corporation in Mapo District to found a Culture Creation Center, modeled after England’s Tate Modern project. The plan was to build a Culture Creation Center, with the power plant underground. However, the plan never got off the ground due to the opposition of local residents, who demanded a complete relocation of the power plant.

“In a densely populated area like Seoul, restoring streets or structures is difficult with connectivity between different regions,” said Yeo Jang-gwon, a Seodaemun District official. “It might be wiser to leave expansion of the history restoring business at the national level rather than leave it to local businesses.”

Jung Kwang-ho, a professor of the Graduate School of Public Administration at Seoul National University, agreed.

“It is important to mediate policy through integrating systems that are dispersed throughout central departments and to prepare a practical plan with a comprehensive vision that brings the whole region together,” Jung said.