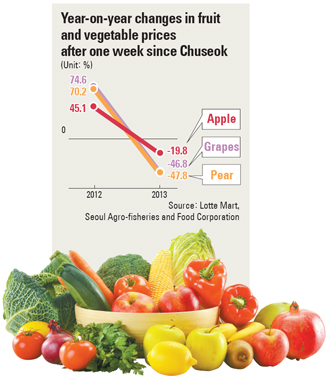 Consumers will not find cheaper typhoon-damaged local fruit at discount stores as they have this time of year since 2009, but they will enjoy overall prices that are significantly lower than last year due to an increased supply.

Over the past four years, typhoon damage has affected about 40 percent of fruit, about three times more than the typical natural damage rate.

With no typhoons in Korea this year, shipments of apples and pears increased 20 percent to 30 percent, and the average prices of fruits have declined accordingly.

As of Friday at Garak Market in Garak-dong, Songpa District, southeastern Seoul, wholesale prices for 15 kilograms (33 pounds) of apples were 32 percent lower than last year and 46 percent lower for grapes.

Last year, because of typhoon-related damage, wholesale prices of fruits a week after Chuseok increased, with apples soaring 45.1 percent from two weeks earlier and pears shooting up 70 percent.

“Shipments of fruits and vegetables increased this year without any typhoon. In the meantime, as farmers are struggling from the reduced demand after Chuseok, we plan to hold a variety of promotional events,” said Woo Joo-hee, manager of fresh food at Lotte Mart.