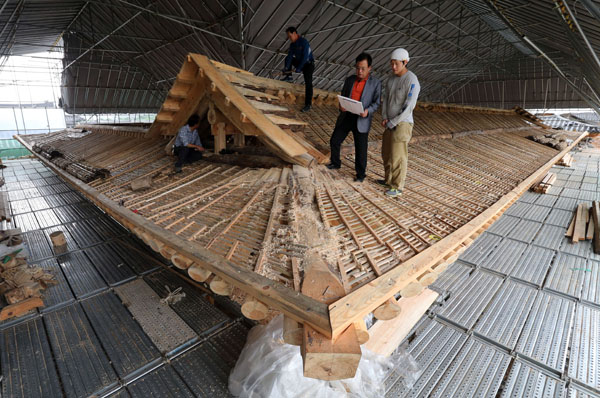 Sin Eung-soo, second from right, the master carpenter in charge of the restoration of the royal kitchen within Gyeongbok Palace, discusses the process with carpenters. The restoration is 65 percent complete. By Kim Seong-ryong

Besides those, he also ate rice porridge at 7 a.m., and light meals whose main dishes were usually noodle soup at 1 p.m. and 9 p.m. at night.

And if you thought that was too much, you might want to think again.

During major holidays like Chuseok, a mega-scale meal was prepared. It consisted of over 40 dishes, including songpyeon (a rice cake steamed with pine needles), taro soup and various kinds of wild vegetables.

But the biggest irony here is that in none of the five Joseon-era palaces in Seoul - namely, Gyeongbok, Changdeok, Changgyeong, Deoksu and Gyeonghui - is there a kitchen where court ladies prepared these foods for the kings.

As Korea experienced numerous invasions from neighboring countries, Japanese colonization (1910-1945) and the 1950-53 Korean War many of them were burned down or demolished at some point during the historical turmoil.

Currently at Gyeongbok Palace, the royal kitchen that was called names such as Sojubang or Suragan is being restored. The Korean government has earmarked about 13.7 billion won ($12.8 million) for the restoration. Launched in September 2011, the restoration is about 65 percent complete.

Come fall of next year, visitors to the palace will get a glimpse of the royal kitchen, which was the setting of “Daejanggeum,” the 2003 mega-hit historical TV drama also known as “Jewel in the Palace.”

The painting of a 1605 royal ceremony in which King Seonjo invited elders to celebrate their long life, top, shows meals prepared for the guests. Another painting shows male chefs preparing meals at tents set up on the yard. Provided by Cultural Heritage Administration

In fact, the Gyeongbok Palace had several kitchens across its vast grounds.

The largest of all was the one close to Gangnyeongjeon (where the king slept) and Gyotaejeon (the bedroom for the queen). There, court ladies cooked not only daily meals for the king and the queen, but also special meals for royal ceremonies held throughout the year.

The kitchen that is under reconstruction experienced several ups and downs. According to historical documents, it was burned to the ground during the Japanese invasions known as the Imjin War (1592-98).

It was rebuilt only centuries later - between 1865 and 1868, which was when King Gojong (1852-1919) restored parts of the palace. Historians presume that the structure was again demolished by the Japanese some time around 1915 as they held an industrial expo within the palace during its colonial rule.

The structure, which measured about 3,300 square meters (35,521 square feet) during its heyday, was just an empty lot filled with grass and trees before the reconstruction kicked off two years ago.

This is actually the case with most of the empty land in today’s Korean palaces - they used to be packed with structures.

During the excavation conducted by the National Research Institute of Cultural Heritage between 2004 and 2005, researchers found traces of underground drains, chimneys and wells.

Inside, the royal kitchen consisted of different zones.

There was an area, close to the king’s and the queen’s quarters, that cooked meals for the king and the queen; a place that was in charge of special meals at royal ceremonies; and an area where desserts and refreshments were made.

The builders have based their work on the floor plan of Gyeongbok Palace drawn between 1880 and 1890, as well as the detailed painting of the palace created in 1907.

“The structure is not that different from other palace structures,” said Sin Eung-soo, the master carpenter in charge of the restoration. “But it’s notable that it was large and that it had separate chimneys for the kitchen and ondol [Korea’s traditional underfloor heating system].”

Designated by the state as Intangible Cultural Heritage No. 74, Sin was in charge of the repair and restoration of some of the most important wooden structures in Korea, including Changgyeong Palace, Gyeongbok Palace and Namdaemun Gate, also known as Sungnyemun Gate.

When there were large-scale festivities, and a lot of food had to be prepared, makeshift tents were set up at madang, a yard situated at the center of traditional Korean buildings, and even male, professional chefs were summoned as helping hands.

In fact, it was those guys who lost their work in the final years of Joseon and opened upscale Korean food restaurants across the country who let the people know about the food served at court ceremonies.

Once the reconstruction is finished, the remaining task will be filling the inside with proper items.

According to part of the Uigwe books that detail the protocols for Joseon Dynasty ceremonies and rites, they plan to re-enact royal kitchen scenes with appropriate furniture and tools.

Officials expect they will be decorating the area with various pieces of silverware, white porcelain and lacquered items made by Korean craft masters designated as Intangible Cultural Assets by the Korean government for their skills.

“We hope to decorate the area and hold various hands-on programs so that the visitors who fell in love with Korea, its history and its food, through dramas like Daejanggeum, can also take part,” said Choi Yi-tae, an official of the Royal Palaces and Tombs Division of the Cultural Heritage Administration.