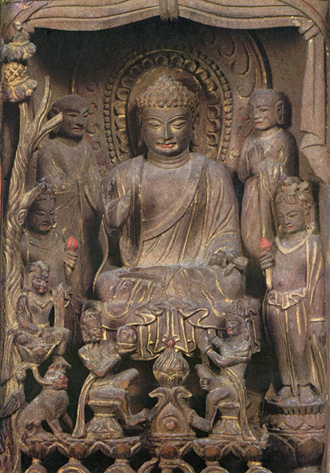 In Korea, a devoted Buddhist carries a small image of Buddha to protect himself from evil forces in an altar chest called a Buddhist niche. Jinul, one of Silla’s greatest religious leaders, is thought to have brought this altar chest from China.

The chest is made up of three compartments linked by hinges.

The compartments form an octagonal box with an oval-shaped top that measures 13 centimeters high by 17 centimeters wide (5 inches by 6 inches).

The central altar has an image of a principal Buddha on a pedestal decorated with patterns of lotus flowers, while each side compartment enshrines a Bodhisattva.

The principal Buddha on the central altar wears a robe. Its right hand is raised to its shoulder while the left hand on its lap holds a symbolic object.

The left altar enshrines the image of Samantabhadra, an apostle, seated on a pedestal with an elephant inscribed.

Next to her are the images of a child and of a lion. On the right altar, the image of Manjusri, who symbolizes wisdom and intellect, stands on a pedestal of a lion, holding a lotus flower.

*The photos and text for National Treasure are provided by the Cultural Heritage Administration. For more information, call (042) 481-4650 or visit www.cha.go.kr.