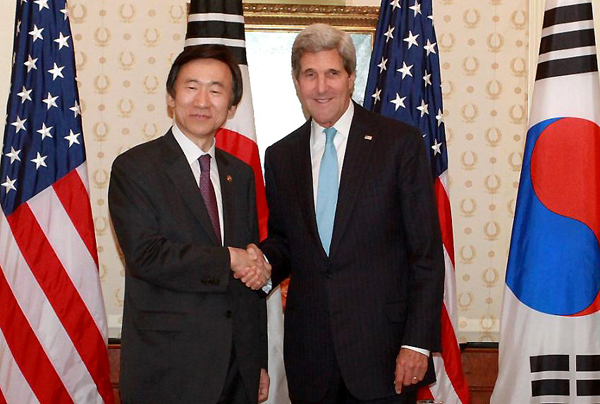 Korean Foreign Minister Yun Byung-se, left, with U.S. Secretary of State John Kerry on Friday in New York at their talks on the sidelines of the 68th UN General Assembly meeting. Provided by the ministry

South Korea’s top diplomat used sharper words than in prior years in calling for Japan to take “responsible measures” to address the issue of so-called comfort women, who were prostituted for Japanese soldiers during World War II.

As part of the UN’s annual general debate, Foreign Minister Yun Byung-se said Friday in New York that sexual violence during conflicts “is a war crime that not only destroys the life of the victim, but also that of the victim’s family and the community.”

Although he did not mention Japan by name, he referred to the “increasing need to protect civilians, including women and children, from armed conflicts around the globe,” and then said that pain and suffering continue for victims of such violence in the last century.

“Responsible measures are called for that can restore the victims’ honor and soothe their pain, as it is a universal human rights issue,” he said.

The comments came about three-quarters through his address, which he began by welcoming the recent UN Security Council resolution on Syria and criticizing North Korea for its nuclear weapons ambitions and decision to delay the next round of separated family reunions.

Prime Minister Shinzo Abe, in his address on Thursday, focused on women’s empowerment and rights in his General Assembly address. Among the themes he sounded was calling sexual violence against women during times of armed conflict an “outrage.” He said that Japan “will do everything possible to prevent such crimes against women and to support both materially and psychologically” victims of sex crimes. He promised $3 billion in foreign aid for women-related causes in the next three years.

On the sidelines of the UN General Assembly meeting, Yun held a series of bilateral talks, including with his Japanese counterpart Fumio Kishida on Thursday, without making much headway in conflicts such as the territorial dispute over the Dokdo islets, called Takeshima by Japan, and the comfort women issue. The Ministry of Foreign Affairs said Yun, in his second meeting with Kishida, called on Japan to take “sincere measures” to resolve the comfort women issue.

Kishida repeated Japan’s position that the legal issues were settled in a 1965 agreement, but that Abe has expressed remorse over Japan’s use of foreign women as sex slaves. The two made even less progress in trying to set a date for the first meeting of President Park Geun-hye and Abe. Kishida asked Seoul to lift its ban on selected Japanese produce imposed after the Fukushima nuclear meltdown.

In his General Assembly speech, Yun urged the international community to “forge united efforts to roll back [North Korea’s] nuclear weapons programs to prevent the advent of another nuclear-armed state.”

He added that if North Korea “decides to give up its so-called parallel pursuit of economic development and nuclear armament,” South Korea “stands ready to help.”