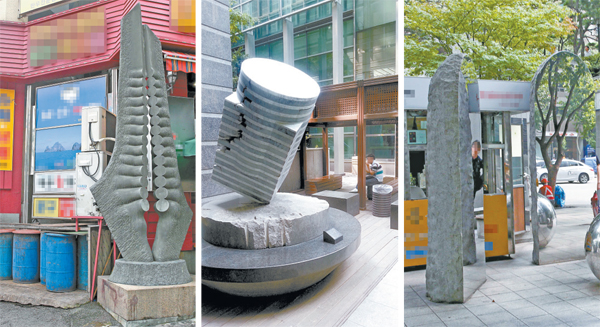 From left: A sculpture located next to trash cans near Cheonggye Stream in Mugyo-dong, central Seoul; an artwork with traces of cigarette ash in Gangnam, Seoul; an installation crowded out by the signboard of a parking booth in Gangnam. By Ahn Seong-sik

The poor management of large sculptures gracing the public areas around skyscrapers has turned some of the once beautiful artworks into blots on the landscape.

A slanted marble sculpture erected in front of the looming L&B Tower in Gangnam District is littered with cigarette butts. The two-meter-high (6.6-foot) installation was created by Park Eun-sun and cost 140 million won ($130,340).

Another artwork in front of a nearby residential complex is partially blocked by the sign board of a parking lot booth; the two structures are crowded close together.

The manager of the luxury building, Daewoo I Vill, cited the absence of any shared responsibility for the stainless steel installation.

“Each resident is a joint owner of this building. So there is no single landlord to be held accountable,” said the management head, who refused to be identified.

The law requires that high-rise projects with a land area of more than 10,000 square meters to include art works valued at 0.7 percent or more of the cost of the entire project. The intent, when the law went into effect in 1995, was to add some class to street views and shake off the perception that Korea’s streetscapes were cluttered and disorganized.

That led to an explosion of more than 13,000 works of art near or inside the city’s new buildings. This year alone, more than 900 million won has been invested in these works.

But instead of being treated as public art for everyone’s enjoyment, many of these works are, it appears, dismissed as white elephants.

Behind a curve-laden installation in the courtyard of Hyundai Tower on Teheran-ro in Gangnam stands a pile of sandbags stockpiled there for snow removal work in the winter. A line of garbage cans stands as a tribute to a trophy-shaped statue in central Seoul’s Mugyo-dong.

The JoongAng Ilbo looked at 67 artworks in the Gangnam, Cheonggye and Yeouido areas to check the fate of installations there. Nineteen of them, more than a quarter, showed rust, cracks and other evidence of neglect. No signage explaining the work was to be seen at 33 installations.

“The building owners rarely pay attention to the artworks,” said Lim Ok-sang, an installation artist. “Many say things have gotten better, but many buildings just place those sculptures and then do nothing to preserve them.”

Some describe the problem as a legal loophole; once installed, there is no encouragement or compulsion to keep the works in good condition.

Building owners say that it’s unwarranted government intrusion to mandate the artworks and would be an even greater intrusion to enforce their maintenance. “The idea that the government can force large buildings to have such works is a bit outdated,” said the owner of an upscale shopping center in Gangnam District. “The government should let building owners decide whether they should install sculptures or not.”

The government agency noted complaints and introduced a new policy in which building owners can donate 70 percent of the cost of a sculpture installation to the Culture and Art Promotion Fund. But only 6 percent of owners used the new policy instead of installing artworks. Owners say they prefer owning artworks rather than paying money to the public fund.

Cho Gyeong-jin, a professor of landscape architecture at Seoul National University, sounded hopeful but perhaps too idealistic in noting that under ideal circumstances, the owners would acknowledge the positive impact that well-designed artworks have on the urban environment. “The owners need to know that one great artwork can enhance the value of the building,” he said.