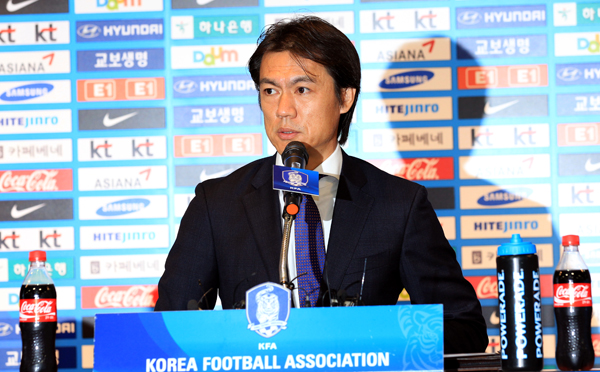 Hong Myung-bo, manager of the Korean national football team, yesterday announces his 25-man squad for games against Brazil and Mali in October. By Jung Si-jong

Despite some controversy over comments made online by Ki Sung-yueng of Sunderland, the midfielder has been included on manager Hong Myung-bo’s 25-man national football team roster ahead of friendlies against Brazil on Oct.12 and Mali on Oct. 15.

In a press conference yesterday, Hong announced his squad for the coming matches, and Ki was included on the national team roster for the first time since March 26, when he played in the World Cup qualification-round game against Qatar.

However, striker Park Chu-young of Arsenal was not included again.

“I met Ki when I went to the U.K. to see how players in the English Premier League are doing,” Hong told reporters. “I was able to see Ki regretting his [social media] misbehavior and his physical condition is getting better. Now he needs to show he is worthy for the country in front of the fans.”

Under Korea Football Association rules regarding player ethics and behavior, a player judged by the disciplinary committee to have brought disgrace upon or caused a rift within the national team can be subject to a multiple-year ban or even expulsion from the local football community.

“The October games against Brazil and Mali are very important for the team to prepare well for the World Cup,” Hong said. “I already had said that I wanted to have a strong squad against Brazil because they are coming with their best squad as well.”

Earlier this week, Brazil said that they would likely play their best players against Korea, including FC Barcelona’s star forward Neymar.

Hong left FC Seoul midfielder Ha Dae-sung off the roster this time despite impressive performance in previous friendlies because he thought Ha needed time to recover.

“He looked tired when I saw some of his recent games,” Hong said. “He also has the Asian Champions League games and another game against the Suwon Bluewings on Oct. 9.”