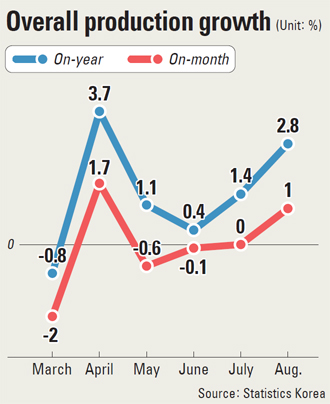 Is Korea’s economy on a path to recovery?

According to Statistics Korea, industrial and service production in August recorded a 1 percent increase after flat growth in July.

August output when compared to 2012 was up 2.8 percent. The last time output grew was 1.7 percent month-on-month in April.

Korean government officials have been confident over the economic growth.

During a press briefing after the central bank’s monthly monetary policy meeting last month, Bank of Korea Gov. Kim Choong-soo stressed his confidence that the economy is in a mild but sustained recovery.

He said he was sticking to the earlier projection of 3.7 percent growth in the second half of the year and 4 percent in 2014.

The Bank of Korea will announce the third quarter economic growth rate later this month.

“Industrial output in August grew as demand from recovering advanced economies expanded, while production in the automotive industries normalized [from a labor strike],” said Chae Hyun-ki, an analyst at KTB Investment & Securities. The analyst noted that exports in August did better than expected, increasing 7.7 percent year-on-year, and the improvement likely continued in September.

“We expect the economy to sustain a mild recovery as even exports and imports last month continued to grow despite negative factors like the strengthening of the Korean won and fewer working days compared to a year ago,” Chae added.

Most indicators were positive in August.

Industrial output from manufacturing and mining saw the biggest increase in nine months, thanks largely to the improvement in exports. Releases of new smartphones as well as the end of labor actions in the automotive industry contributed as well.

When compared to a year ago the output grew 3.3 percent.

The automobile industry’s output saw a double-digit growth of 18.9 percent, while the visual, audio and telecommunication sector expanded 11 percent.

Retail sales grew 0.4 percent month-on-month, continuing an upbeat trend for the third consecutive month. When compared to a year ago, even retail sales were up 2.5 percent.

Investment in plants and machinery turned around from a 2.7 percent decline in July to 0.2 percent increase in August.

However, looming doubts linger over whether Korea’s economy can achieve the government’s 2.7 percent growth outlook on the back of persistent uncertainties in the global economy, including the ambiguous direction of the U.S. Federal Reserve’s tapering of its bond-purchasing program and mounting concern over the congressional confrontation on Capitol Hill over raising the $16.7 trillion debt limit.

LG Economic Research Institute on Sunday released a report stating that the uncertainties in the United States could hinder the global economy.

“The United States is on the doorstep of an exit strategy while leading the global economic recovery,” the report stated. “However, its fiscal and monetary policy uncertainties won’t easily be resolved.”

Markets across Asia, including Seoul’s main bourse, all retreated yesterday on concerns over the political standoff in Washington.