From corner office to court custody

From corner office to court custody 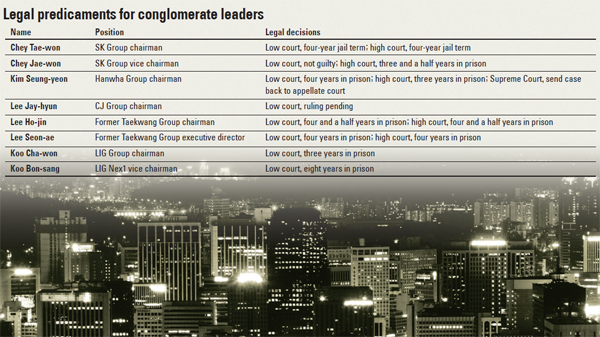 Chey Jae-won, SK Group vice chairman, is in court custody after the Seoul High Court overturned a lower court’s decision to acquit him on Friday.

That raised the number of conglomerate leaders in court custody to eight.

Adding insult to injury, other names are surfacing that could join the heads of family-run conglomerates subject to prosecutions related to business practices.

The degree of legal trouble is rare for chaebol, which have contributed so much to Korea’s economic growth ? not even during the slush fund scandals involving former presidents Chun Doo Hwan and Roh Tae-woo in the 1990s, when many business owners were summoned to Seocho-dong, the court town in Seoul.

The Chey brothers, leaders of the third-largest conglomerate, were charged with embezzling 46.5 billion won ($43.3 million) in group funds for personal use.

Vice Chairman Chey Jae-won, who was arrested at the prosecutors’ investigation stage, was released after a lower court decision in January.

Chey Tae-won was not in custody when he entered the lower court process, but he was arrested after the lower court ruling that he played a leading role in the alleged embezzlement.

The appellate court last Friday upheld the decision, keeping him in custody.

CJ Chairman Lee was indicted for allegedly embezzling CJ money and creating slush funds of 620 billion won to evade taxes, while former Taekwang Chairman Lee is also accused of embezzling hundreds of billions of won in corporate cash. Both were arrested during the investigation and indicted later. Hanwha Chairman Kim, and former Taekwang Executive Director Lee, were indicted without court custody but later detained.


It is quite rare that so many corporate family members are in custody at the same time.

Those in the local judicial community, however, say times are changing.

In the past, courts usually handed down a suspended prison term to chaebol leaders, citing their age and their contribution to the national economy. At one time, a three-year jail term suspended for five years was called an invention by the court to favor corporate leaders.

But these days, the courts are detaining chaebol leaders and handing out prison terms.

Some say that is the result of a trend in which the court determines a case based only on statements and testimony in court, no matter the wealth or social status of the accused.

In the past, when multiple leaders of a conglomerate were indicted, the court typically released one. No longer. In the case of SK, Taekwang and LIG, two family members from company each are under arrest.

The Park Geun-hye administration also refrains from a time-honored practice of pardoning those in prison on special occasions such as the Aug. 15 Liberation Day.

The business community, however, is expressing concern about the court’s growing intolerance toward conglomerates, saying they will leave a significant vacuum in the decision-making process of companies. They say it will make it difficult for companies to invest in new businesses, citing SK Group, which recently withdrew its bid for STX Energy.

Finally, some say the humiliation that conglomerate leaders get from judges and prosecutors negatively affects the morale of businesses.

“We can live with a strict execution of law, but when the prosecutors or judges dismiss corporate figures as a social vice or humiliate them, it affects not only those people, but also the businesses of the companies involved,” said an official on condition of anonymity.