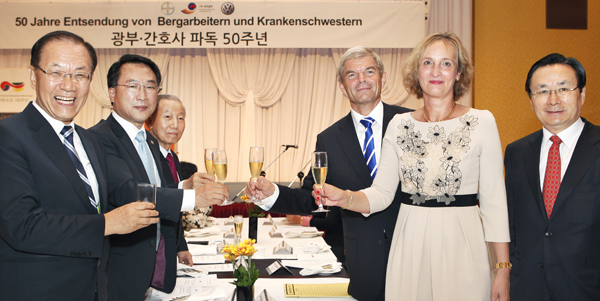 From left: Hwang Woo-yea of the Saenuri Party, Labor Minister Phang Ha-nam, Cho Hae-hyeong of the Korean-German Chamber of Commerce and Industry, and German Ambassador Rolf Mafael and his wife, Christina. By Park Sang-moon

Fifty years ago, Korean nurses and miners were sent to Germany to serve as guest workers during the poverty-stricken times of the 1960s and 1970s. On Sept. 24, the German Embassy hosted an event to honor the workers’ arrival and efforts.

German Ambassador Rolf Mafael, joined by hundreds of the guest workers, as well as Chairman Hwang Woo-yea of the Saenuri Party and Labor and Employment Minister Phang Ha-nam, highlighted the significant role that the nurses and miners have played in Korean-German relations.

“When I came to Korea one year ago, I learned the importance of the workers,” the ambassador said. “Back in the 1960s and ’70s, Korea was a war-ravaged and isolated country. But, with tens of thousands of Koreans traveling to Germany, you served as a bridge and civil ambassador for both Korea and Germany,” he said, adding that some of the nurses became career diplomats after their service ended.

Examples of nurses-turned-diplomats include Kim Jung-soon, honorary consul in Busan, and Kim Young-hee, an ambassador to Serbia, he noted.

Mafael then quoted one miner and one nurse’s words to give a sense what it was like to work as a guest worker in an alien country.

A nurse named Mi-kyung recalled, “I feel as though I had become a young, fragile bird struggling to fly.”

The miner recalled, “I missed virtually everything in Korea - a familiar environment, language and people.”

The ambassador emphasized Germany’s strong attachment to the dispatched workers. “All the miners and nurses and their families and children are one of the most important networks between the two countries.

“As an ambassador, I’ve met a number of people who used to work as miners and nurses in Germany and their relatives. I also met the Koreans in Germany.”

He also mentioned the positive impact that the workers had on German society.

“They might have felt alienated to Germany at first, but they adapted to Germany very well. And now we have 40,000 Korean nationals or ethnic Koreans living in Germany. They are a dynamic part of German society.”

The commemoration was held in the form of a reception and different performances, including a chorus of the traditional folk song Arirang.

To commemorate the 50th anniversary, the Korean government opened a memorial center honoring the workers on May 20. The memorial hall exhibits articles used at the mines, such as arches from the pit, rock drills, safety hats and salary cards.