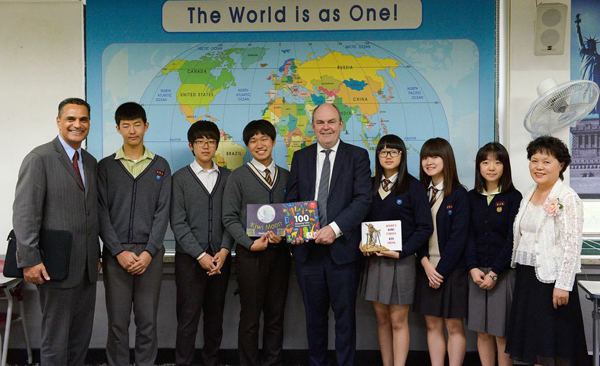 In a classroom in Songpa District in southeastern Seoul, Steven Joyce, New Zealand’s education minister, read out a short Maori fable to a group of middle school students.

These Jamsin Middle School students, as they were part of an international class, or students who aspire to study abroad, listened to the story raptly in English, and even had some questions for Joyce, the tertiary education, skills and employment minister.

Some were curious about Joyce’s trip to Korea, while others were interested in studying in New Zealand.

“We have very strong relations between our two countries,” Joyce said. “We have about 55,000 Korean people living in New Zealand and important trading relations.”

Joyce visited the school on Sept. 11 as a part of a four-day visit to Seoul, where he led a delegation to promote New Zealand Education, met with Korean government officials, education leaders and students, and attended an education fair.

“Traditionally, Korean students have come to high schools and also to study in the many English language learning programs available across New Zealand,” Joyce told the Korea JoongAng Daily.

“New Zealand education has strong links with industry and business, and New Zealand-educated graduates .?.?.?are work-ready, innovative and flexible, have a good mix of the applied and the theoretical and can move easily between the two.“

Joyce was able to meet a 15-year-old Jamsin Middle School student who studied in New Zealand over the summer on a scholarship. Joyce, who met with the principal of the middle school, as well as the head of Songpa District, said he was impressed with the students he met. He also presented the students with English books from New Zealand, including a book of Maori fables.

New Zealand’s Christchurch and Songpa District, an education hub, have been sister cities since 1995 and have fostered education exchanges over the years.

Jamsin Middle School Principal Kim Myoung-soo said, “As you know, Christchurch and Songpa District fosters a very special relationship over the years as sister cities. We work at sending our international class to study abroad and are very proud that two of our students have received scholarships from New Zealand.”

There was a slight damper in educational exchanges in 2011 after a tragic earthquake in Christchurch, said Kim, but the exchanges have resumed. “Our students also have pen pals in New Zealand,” Kim said.

Joyce participated in the two-day New Zealand Education Fair at COEX, southern Seoul, last month, which presented over 30 New Zealand schools, education institutes and universities to Korean students who may be interested in studying abroad.

“New Zealand and Korea share an understanding of the importance of education in contribution to the economic growth of a nation,” said Joyce. He added that opportunities like the education fair are important because “There’s nothing quite like the face-to-face interaction of this sort to give students and families a real sense of what New Zealand can offer.”