Japanese lawyer made Koreans’ cause his own

Japanese lawyer made Koreans’ cause his own 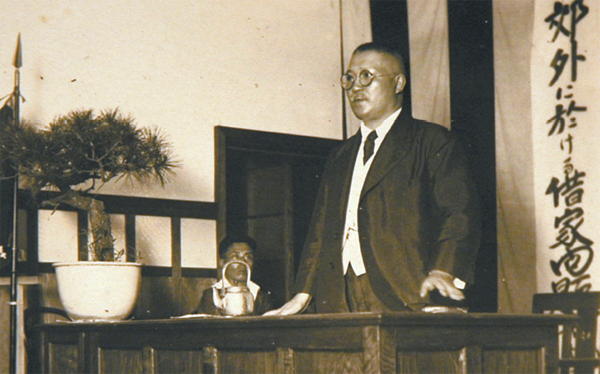 Tatsuji Fuse, a Japanese civil rights lawyer, spoke about housing disputes in the late 1920s. Fuse fought for Koreans who sought independence from Japan under his motto that he would fight for the weak and the righteous. Provided by Hyeonamsa

The mood was solemn.

At 2 o’clock in the afternoon on Feb. 8, 1919, about 400 Korean students studying in Japan filled with passion and determination gathered at a Christian youth center in Tokyo.

Choi Pal-yong (1891-1922), now remembered as a famous independence fighter in Korea, walked up to the podium and declared the launch of the Joseon Youth Independence Fighters’ Group. Joseon was a name for Korea at that time, which comes from the preceding Joseon Dynasty (1392-1910).

Baek Gwan-su (1889-unknown), one of the 11 representatives of the group, read the Declaration of Independence with a heavy voice. “On behalf of the 2 million Joseon people, the group declares to the world its determination to introduce independence [to the country],” he said. (Baek was later kidnapped to North Korea.)

Just as Seo Chun (1894-1944) was about to walk up to the podium, Japanese policemen raided the place, forced the students to disband and arrested who they deemed were key figures in the movement.

Japan indicted nine people - including Choi, Baek and Seo - on charges on violating the publication law. A week after the incident, Choi and Seo were sentenced to one year imprisonment in the first trial.

But it wasn’t the ruling that angered Korean students the most, but the way their lawyers treated them. They made condescending remarks like, “We admit that they brought disorder to national constitution, but ask for extenuation,” and “Joseon is like servants’ quarters while Japan is the main structure [in a building] … Getting rid of servants’ quarters does little to damage the forms of state.”

That’s when they turned to a man named Tatsuji Fuse (1880-1953) for help. Fuse, a Japanese human rights lawyer, was investigated by the Japanese prosecution in 1911 for his comment, “I respect Joseon’s independence movements.” Fuse defended the young Korean students for free, but he did not ask for favorable arrangements from the judges in a servile manner.

“How come Japan supported the independence of Czechoslovakia and dispatched troops to Siberia but is not helping with Joseon’s independence attempts?” he challenged them. “The Declaration of Independence by the Joseon youth, therefore, is valid.” The one-year imprisonment sentence was reduced to a nine-month imprisonment after appeals and appellate trials. And since then, the people of Korea got to have a deep confidence in Fuse.

Susumu Oishi, one of Fuse’s grandchildren, said at a 2007 exhibition dedicated to the lawyer that, “Fuse truly sympathized with the Korean people’s fight for their dignity and was determined to defend them until all the people at the court understood that too.”

Oishi added that Fuse thought highly of the declaration on Feb. 8 as it was written by the Korean youths and felt responsible that the story had to be written in history and told to future generations.

Fights against death penalty and more

This year marks the 60th anniversary of the death of Tatsuji Fuse, who is often described in Korea as the “friend of Koreans,” or the “Japanese version of Schindler,” referring to Oskar Schindler (1908-1974), a German who is credited with saving the lives of 1,200 Jews during World War II.

In fact, Fuse is the only Japanese to have received the Order of Merit for National Foundation from the Korean government. In recognition of his contributions to the country’s independence from Japan as well as the foundation of today’s Republic of Korea, the Korean government honored him with the order in 2004. According to the Ministry of Patriots and Veterans Affairs, about 40 foreigners have received the order, with Fuse being the only ethnic Japanese.

“As I was sifting through materials to protest the government move to demolish the Seodaemun Prison History Hall, I accidentally came across documents about Fuse and his works,” said Jeong Jun-yeong, the head of a research society on Fuse. Jeong and the documents he found are known to have played a key role in conferring the posthumous honor on Fuse. Jeong held a symposium on him, initiated a signature-gathering campaign and convinced the people at the Ministry of Patriots and Veterans Affairs.

Born in a farming village in Miyagi Prefecture in the northwestern part of Japan, Fuse was a humanist deeply influenced by Russian writer Leo Tolstoy. “[My father] was a student of Tolstoy,” Kanji, Fuse’s eldest son who had worked as a journalist at the Nihon Keizai Shimbun, recollected in his book about his father. “He put up a picture of Tolstoy on the wall of his study and prayed that he becomes strong enough to fight for the weak and the righteous.”

After graduating from Meiji University in 1902, Fuse became a probationary judicial officer (prosecutor). However, when he was ordered to indict on attempted murder charges a woman who attempted to commit suicide with her children amid financial difficulties, he refused to obey the order and resigned. Afterward, he became a lawyer specializing in human rights issues like labor disputes, abolishment of the death penalty and state-regulated prostitution.

In 1920, in a written statement, Fuse declared that he would work less at courts and more in the society, fighting for social oppression as well as get involved in cases that reflect the interests of the Joseon and Taiwanese people (who were under the Japanese colonial rule at that time.)

Great Kanto earthquake And he kept his words.

After the Great Kanto earthquake in 1923, false rumors that Korean residents in Japan were committing robbery, poisoning the wells or carrying bombs spread amidst a state of disorder. And it led to a sudden wave of killings of Koreans in the disaster area, with thousands of Korean people murdered.

Although anti-Korean sentiment in Japan was higher than ever at that time, Fuse openly criticized the massacres and through the group of human rights lawyer that he belonged to, called on the Japanese government to investigate the case thoroughly and punish those accountable.

Fuse’s eldest son said in the book that “he agonized over the fact that he did nothing to stop the nationwide delusion and at the possibility that some Koreans might have been caught and murdered on their way to his office to ask for help.”

The following year, Fuse published a report on the massacres on his own. In it he said, “the way Koreans were murdered was so brutal that it cannot be described in words. … The Japanese people used iron hooks, bamboo spears, wires, guns and Japanese swords. It gives me shudders.”

He added that there were more than 20,000 Koreans living in the disaster area and that after the killings, only between 12,000 and 13,000 remained. Even if he excluded those who died in the earthquake or disappeared, he pointed out, the Japanese government’s figures that 300 Koreans were killed in the incident is substantially lower.

In fact, Fuse had visited Korea during the Japanese colonization (1910-1945) several times, with his first visit taking place between July and August of 1923 - which was right before the Great Kanto earthquake. He visited Korea upon the invitation of Korean students studying in Japan.

During the visit, he toured Seoul and the southern parts of Korea and gave about 10 lectures, saying that the developments initiated by the Japanese Government-General of Korea have nothing to do with the happiness of the Korean people. His argument refuted Japan’s claims that Japan’s colonial rule will bring modernization to Korea. 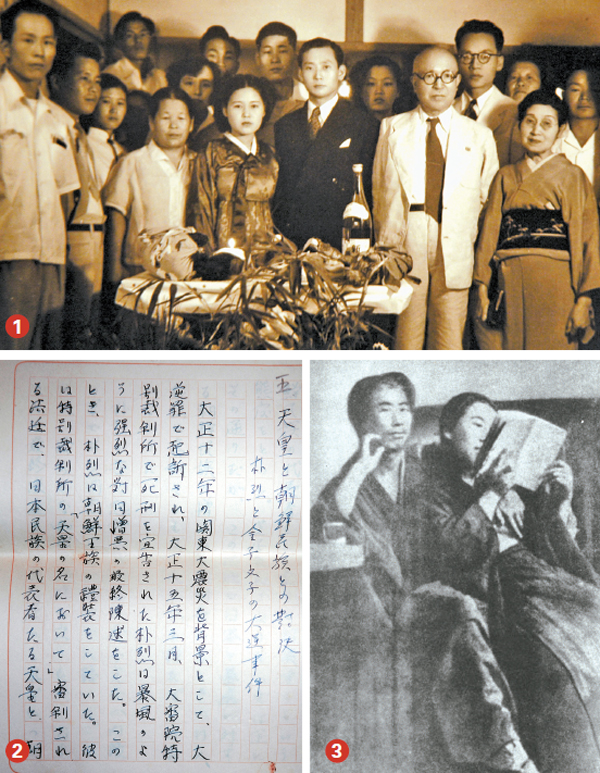 1: Fuse and his wife (far right, front line) at the wedding of a Korean couple. 2: A transcript of Fuse’s defense of Park Yeol. 3: Park Yeol and his wife, Fumiko Kaneko, who were accused of plotting to kill members of Japan’s imperial family. Park survived his prison term, but his wife killed herself while in prison.

This time, he was in Korea to help the residents at farming villages in Naju, South Jeolla, who were protesting Japan’s exploitation of their lands.

“The news of Fuse’s visit in itself put pressures on the Japanese Government-General of Korea as Fuse was already a famous human rights lawyer in Japan,” said Lee Kyu-su, a research professor at the Asian Cultural Studies Research Institute at Gachon University.

“Japan feared that the disputes of land ownership would spread to other parts of the country. … That is why the Japanese Government-General of Korea rushed to reach an agreement with the people of Naju, so that Fuse wouldn’t dig deeper.”

Still, after he went to Japan, Fuse published a book called “Joseon’s Industry and Peasants’ Movement,” in which he lamented that “when Korean farmers see the rice and barley from the land they cultivated all their lives leak to Japan, their sadness and pain will grow.”

When recognizing Fuse’s contributions to the national foundation, the Ministry of Patriots and Veterans Affairs also took into account the work he did for Kim Ji-seob (1884-1928) and Park Yeol (1902-1974) - independence fighters who were accused of plotting to kill members of the Japanese imperial family.

In 1924, Kim threw a bomb at Nijubashi, two bridges that form an entrance to the inner palace grounds of the Tokyo Imperial Palace. He was sentenced to life imprisonment and died four years later in prison. In 1926, Park was also put on trial on allegations that he and his Japanese wife Fumiko Kaneko (1903-1926) plotted to assassinate members of Japan’s imperial family. Fuse defended both men - who later received the Order of Merit for National Foundation from the Korean government. In particular, Fuse was known to have been impressed by Park and his perseverance. In 1946, he published a book on Park and how he endured 22 years, 2 months in prison and lived to see the independence of his country.

It was only natural that Fuse was on Japan’s blacklist.

The Japanese government arrested him, put him behind bars and stripped him of his lawyer’s license twice, on charges that he violated laws regarding the maintenance of public order and the press, among others.

After Japan was defeated in World War II in 1945, Fuse regained his lawyer’s license and helped Korean residents in Japan who were trying to go back to their homeland. When he died in 1953, his children carved on his tombstone his lifelong motto, “Live with the people, die for the people.”

Lee of Gachon notes how “it is unique that although Fuse often defended those with socialist or anarchist ideologies who protested Japan, he himself was never bound by a specific ideology or belonged to a political sect.

“Fuse fought for the peace and human rights in the whole of East Asia, transcending ethnicities or national borders,” he said.