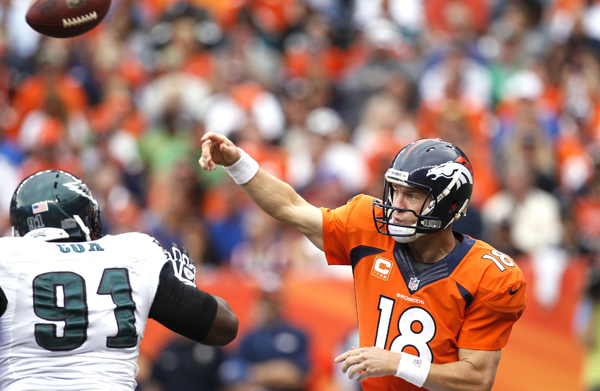 Denver Broncos quarterback Peyton Manning throws against the Philadelphia Eagles in the third quarter during the Sunday game. [REUTERS/NEWS1]

The unstoppable Peyton Manning continued his electric start to the NFL season by throwing four touchdown passes as the Denver Broncos moved to 4-0 with a 52-20 crushing of the Philadelphia Eagles on Sunday.

Manning completed 28 of 34 passes for 327 yards and no interceptions and his work was so effective that he was able to sit out the fourth quarter as the Broncos enjoyed another blowout win.

The quarterback’s 16 touchdowns in the first four games of the season are a league record for the period since the merger of the AFL and NFL in 1970.

“I enjoyed it, we were playing a good team and felt really motivated to score points - touchdowns and not field goals and we did that,” said Manning.

Demaryius Thomas and Wes Welker had two touchdown receptions each while Trindon Holliday scored with a 105-yard kickoff return.

Not for the first time this season, Denver ran away with the game in the third quarter with Manning throwing three touchdowns in that period. The team has scored 62 points in the third so far this season.

The Seattle Seahawks also extended their winning start to a franchise-record four games after a 23-20 comeback victory in overtime at the Houston Texans while the New York Giants suffered a fourth-straight loss with a miserable 31-7 defeat at Kansas City.

The Seahawks’ impressive start to the season looked in danger when they trailed 20-3 in Houston but, helped by some poor choices by Texans quarterback Matt Schaub, Seattle clawed its way back.

Two touchdowns and a pair of field goals in the second quarter had put Houston in charge but Seahawks quarterback Russell Wilson turned on the style in the fourth.

Wilson showed his speed and great footwork on a series of running plays and scrambles, including a crucial fourth and three at the Houston seven-yard line on a 98-yard drive that ended with a three-yard run from Marshawn Lynch.

Still, Houston just needed to eat up the clock but with a seven-point lead and 2:40 on the clock, Schaub attempted to find Owen Daniels but the pass was superbly intercepted by Richard Sherman, who ran it in from 58 yards to level the score.

Houston could not score on two possessions in overtime and Steven Hauschka’s 45-yard field goal secured the victory for the Seahawks.

“This was an extraordinary day,” said Seahawks head coach Pete Carroll, who added that his team had rediscovered its personality in the fourth quarter.

“We just wanted to be who we were capable of being and we weren’t doing that for a while,” he said after his team achieved the best start since entering the league in 1976.

New York Giants head coach Tom Coughlin was in a very different mood after his team’s fourth straight loss, describing the second-half performance as a “debacle.”

The Chiefs, off to a 4-0 start under former Philadelphia head coach Andy Reid, ran away with the game in the fourth quarter. Reuters