Ki gets chance for redemption

Ki gets chance for redemption 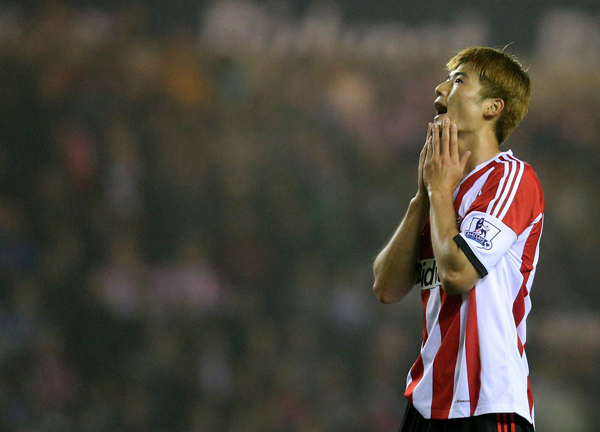 When Hong Myung-bo, manager of the Korean national football team, announced his 25-man roster on Monday for the friendly matches against Brazil and Mali that are scheduled this month, reporters buzzed because midfielder Ki Sung-yueng of Sunderland was included on the roster for the first time in seven months.

Ki, 24, was like the David Beckham of Korea. He had already participated as a starting midfielder in the 2010 South Africa World Cup when he was 21, and he contributed to the country’s first bronze medal in the 2012 London Olympics. The highlight of becoming a “Korean Beckham” was his marriage to star actress Han Hye-jin in July.

But such stories mean nothing, at least for now. Since July, he has drawn fans’ anger over private Facebook messages he wrote that mocked Choi Kang-hee, former national football team manager.

In September, Hong said he wasn’t considering adding Ki and Park Chu-young of Arsenal to his squad, saying, “They are not physically and mentally ready for it.” Park was excluded, just like Hong said, but Ki is on the national team squad for the first time since March 26 when he played in the World Cup qualification-round game against Qatar.

According to sources in the Korea Football Association, there are reasons for Ki being on the team.

“In many international matches, Ki has been a key player in distributing quality passes to offenders, but Hong had a tough time finding others who can do such things,” said an official who requested anonymity. “There are not so many players in the K-League who have that many big-game experiences like Ki has.”

Hong said he will not call up players who haven’t played enough time on their club teams. In the beginning of the English Premier League, Ki spent most of his time on the bench at Swansea City, but he started getting back in shape after he was loaned to Sunderland. He had an impressive performance in the sixth round of the EPL against Liverpool on Monday.

Hong used several alternatives for Ki’s position, including midfielder Ha Dae-sung of FC Seoul and Koo Ja-cheol of Vfl Wolfsburg, pairing with Lee Myung-joo of the Pohang Steelers in a double-volante strategy, putting two defensive midfielders in front of four defenders. These three did a fine job in defense with great stamina, but they weren’t able to make quick, sharp passes, especially in counterattack situations. Hong had included Koo as a forward at that time and decided to rest Ha, who will have to play in the Asian Champions League semifinal game and a league match against his team’s biggest rival, the Suwon Bluewings.

The question is whether Ki can overcome the pressure he will be under ahead of the game. In the press conference, Hong said Ki needs to apologize to the public regarding the SNS mistake. “I was able to see Ki deeply regretting about the SNS thing when I spoke with him in the U.K.” Hong was quoted as saying in the interview. “I told him that he needs to make a ‘sincere’ apology, not only to football fans but also to his teammates and former manager Choi.”

Hong handled a similar situation ahead of the 2012 London Olympics when striker Park Chu-young came under fire for acquiring a green card from Monaco. Park explained that it was necessary to continue his career in Europe, but the public saw it as draft dodging. The issue was a headache for Hong, who was considering adding Park to his squad. After being included, Park promised that he will go to the military after finishing his career. Hong supported Park and said he will take Park’s place in the military if he doesn’t keep his promise. After Park scored the winning goal in the bronze medal game against the country’s biggest rival, Japan, no one cares about his green card anymore.

“He now has a chance to go back to his glory days and everything is up to Ki now,” football analyst Han Jun-hee said.