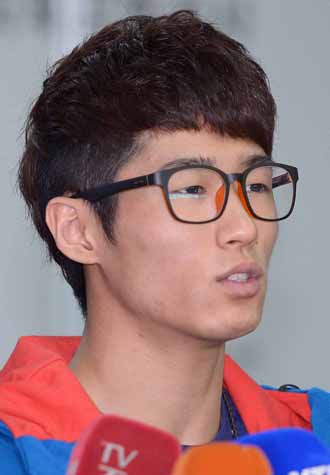 Yang Hak-seon, the 2012 London Olympic gold medalist in vault, got off to a good start in his bid to win a second straight world championship.

In the 2013 World Artistic Gymnastics Championships, currently being held in Antwerp, Belgium, Yang was ranked first in the men’s qualifying round staged yesterday, with an average of 15.299 earned points in two attempts.

He didn’t perform either of his signature techniques, known as Yang2 and Yanghakseon, which is eligible for a 6.4 difficulty score. Yang’s coaching staff said that Yang will likely perform one of his signature techniques in the final on Sunday. To be approved as an official technique, the Korean Gymnastic Association submitted a video clip showing Yang performing Yang2 to the International Federation of Gymnastics ahead of the event, and it was approved as an official technique in vault at a 6.4 difficulty level.

Yang won Korea’s first Olympic gold medal in gymnastics at age 19 with an average score of 16.533 from the two vault attempts.

Yang was expected to face Ri Se-gwang, 27, a hero in gymnastics in North Korea, for the first time, but such event will not happen as he failed to qualify in the preliminary round. Ri won gold medals in the 2006 Doha Asian Games and in the 2008 World Championships. Ri also can perform two 6.4 difficulty level techniques - one is his own signature move known as Risegwang and the other is Dragulescu.

Ri wasn’t able to participate in any international events from October 2010 to October last year. Before the 2010 Guangzhou Asian Games, some members of the North Korean gymnastics team were caught falsifying their ages and the entire team was banned from participating in international events for two years. Yang won the 2010 Asian Games, the 2011 Tokyo World Championship and his Olympic gold medal during that time.

“The most important thing for Yang is to perform the ‘Yang2’ technique in this event,” Joo Yong-sam, head coach of the Korean national gymnastics team told the JoongAng Ilbo.


BY Park So-young AND Kwon sang-soo