Clockwise from left: Beside the main gate of Haein Temple stands a giant sculpture made of bamboos. It is “Another Self Within Myself” by Choi Pyung-gon; Kim Wol-sik’s “Nothing for Something” is a Buddha statue surrounded by an artificial cave made with waste paper the artist obtained from 108 senior citizens who live by collecting and selling waste paper boxes; and a group of wooden sculptures depicting abandoned pet dogs by Yoon Suk-nam are installed on Sorigil Trail near the entrance of the temple. All these works are part of the 2013 Haein Art Project with the theme of “maum” which means mind. By Moon So-young

HAPCHEON, South Gyeongsang - Here is a Buddhist story. The sixth-century Chinese monk Huike, called Hae-ga in Korea, one day asked his teacher Bodhidharma, well known as the father of Zen Buddhism, to ease his anxious mind. Bodhidharma replied to him, “Bring your anxious mind to me. I will help you.”

Then, Huike started to search his mind but could not find it. Six years later, he finally realized that the mind is inherent to be empty. Huike returned to Bodhidharma and said, “The mind cannot be found.” The teacher answered, “Now, my work to put your mind at peace is over.”

The 2013 edition of the Haein Art Project, a contemporary art show held by the Haein Temple with a history of longer than 1,200 years, starts from this story, the organizers said. With the theme of “maum,” which means mind or heart in Korean, 30 Korean and foreign artists have installed 70 pieces of works, including sculptures and media art, in and around the temple on Mount Gaya.

Haein Temple is famous for housing the Tripitaka Koreana, a collection of more than 81,000 wooden tablets of Buddhist writings, which are on the Unesco World Heritage list.

The Haein Art Project started in 2011, as part of events to celebrate the 1,000th year since the manufacturing of the Tripitaka Koreana’s first edition started. The second edition this year accompanies the Tripitaka Korea Festival running until Nov. 10.

“The 52 million words on the Tripitaka Koreana tablets can be summarized into one word, ‘maum,’” the Venerable Hyang Rok, head executive of the art project, said at the temple last week.

“According to Buddhist tenets, everything is created only by the mind, or maum,” he continued. “Maum has no substance. It is only a phenomenon or an action. However, people tend to think that maum is absolute. The temple is the place where people [rest] their mind. The art pieces, which were made through the artists’ works that resemble monks’ practices, will help it.”

Indian artist Shilpa Gupta’s work titled “100 Steps,” installed at Sorigil Trail near the entrance to Haein Temple, is intended to help viewers look back on their mind and body, which may be full of various pains, and meditate on them. 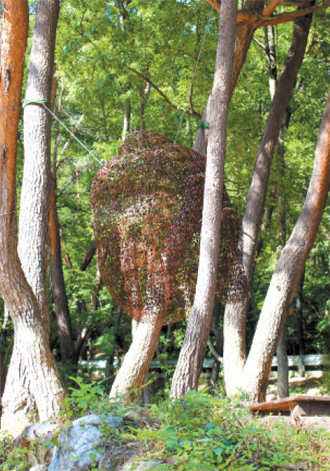 Lim Ok-sang’s “Heoheo Buddha,” installed in a yard near Haein Temple, is also part of the Haein Art Project. By Moon So-young

The work is a stone path with sentences or words inscribed on each stone. The artist inscribed them, inspired from the Buddhist scriptures that she read. Accordingly, the viewers come to read them, slowly walking and perceiving cool winds and the sounds of trees and water in the valley with their body and mind.

“The carved stones define a path that is both outward and inward, leading the walkers to the temple and to themselves at once,” said Kim Ji-hyun, curator of the Haein Art Project.

On the Sorigil Trail are also works by other four artists. They include a stone sculpture of the recumbent Buddha by Park Sang-hee; and a group of wooden sculptures depicting abandoned pet dogs by Yoon Suk-nam.

Some of the contemporary artworks for the Haein Art Project are on display at Seongbo Museum at the entrance of the temple.

Among them is the Hong Kong-based artist Leung Mee-Ping’s work titled “Memorize the Future 2013.” It is a group of baby-sized shoes that the artist knitted with the shaved hair from Buddhist monks.

The curator said shaving symbolizes not only getting rid of the physical body and worldly things but also sacrificing virility. It is meaningful that the proceedings of the sacrifice has become a group of shoes for children advancing toward the future, she said.

There are also many artworks in and around the main buildings of the temple, 1.5 kilometers (about 1 mile) or a 20-minute walk north of the museum.

Lim Ok-sang, famous for his devotion to “people’s art” with strong sociopolitical messages, presents “Heoheo Buddha” in a yard near the temple. The Buddha head, made of bronze parts depicting words in Buddhist scriptures and hanging between pine tree boughs, looks just like a vision.

Kim Wol-sik’s “Nothing for Something” is also eye-catching. The artist obtained waste paper from 108 senior citizens who live by collecting and selling waste paper boxes. With the material, he created a Buddha statue surrounded with an artificial cave, which resembles the famous Seokguram cave temple, inside a former store pavilion. Through creating the work with a strangely sublime mood with cheap materials in a gaudy pavilion of the former store, he delivers the message that Buddha can exist everywhere - not only in noble temples.

And beside the main gate of the temple stands a giant sculpture made of bamboos. It is “Another Self Within Myself” by Choi Pyung-gon. A closer look reveals that a smaller figure is in the bigger figure.

“The artist questions this: Are you a small self in the big figure or are you big enough to bear others?” Kim, the curator, said.


Admission to Haein Temple is 3,000 won for adults. Hours are 8:30 a.m. to 6 p.m. Go to Dongdaegu Railway Station in Daegu, and transfer to the subway line No. 1 to get off at Seongdangmot Station. Go to the nearby Daegu Seobu (western) bus terminal and take a bus to Haein Temple. You can get off near Seongbo Museum at the entrance of the temple. For details, call (055) 934-3173 or visit www.haeinart.org.