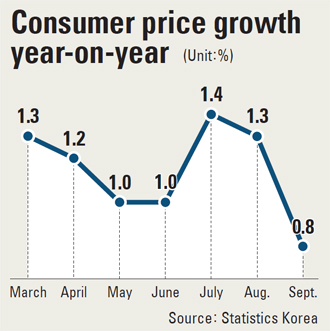 According to Statistics Korea and the Ministry of Strategy and Finance, consumer prices in September grew 0.8 percent compared with the same month last year, the lowest since prices grew in September 1999.

Consumer price growth since the beginning of the year has been hovering above 1 percent.

“While the price of industrial products such as cosmetics and processed food went up, the drop in fresh produce price, including marine products, was the main reason last month’s overall prices increased less than 1 percent,” said a Finance Ministry official.

Fresh produce prices were 7.8 percent less than they were in September 2012. Even when compared with August, the prices were down 2.2 percent. The biggest reason vegetable and fruit prices remained low was because there was no typhoon this summer or heavy rain to damage the crops.

However, the price of sunblock went up 27.3 percent in September, and milk prices were up 10.3 percent. Electricity bills gained 2 percent year-on-year, and gas used in cooking was 5 percent higher.

The Finance Ministry claimed that although inflation is likely to be relatively stable for the remainder of the year, sub-1 percent growth is unlikely to continue, considering that demand is still recovering and uncertainties such as crude oil prices.