Two defectors who found success in the South

Two defectors who found success in the South

Choi Il-nam is a rare defector from North Korea who has graduated from high school and university in the South. By Park Sang-moon

Park Gwang-ryong puts in long hours at his burrito restaurant, just south of Cheonan, South Chungcheong, working nearly every day from 11 a.m. to 11 p.m., then continuing to deliver food to nearby university students as late as calls keep coming in. Despite the heavy workload, though, the 26-year-old likes to keep in good spirits, bantering with customers as he cooks.

“I make it a rule to start off the day cheerful, and to always enjoy myself during the day,” Park explained from his work station, in between cleaning and greeting customers, his voice heavy with an unusual accent. “As soon as we open the store each day we have students come in.”

That accent hints at what makes Park different - he is actually a defector from North Korea.

Just a day before the Chuseok holiday in September, even as the nearby university emptied of most students, Park’s shop still enjoyed a constant flow of young customers, complete with luggage in tow.

“What are you going to do for a whole week that you won’t be able to eat burritos?” Park teased a customer.

He’s clearly a people person who enjoys interacting with customers. But mention “North Korea,” and Park does tense up.

Instead of “North,” Park prefers to euphemistically say “hometown” and “up there,” so that no one will catch on where he is from. It’s a tactic he’s picked up living in South Korea the last 10 years.

“People treat you differently once they know,” he explained, adding that he didn’t want his customers to find out because his restaurant is just a year old.

Having fled at the age of 10 from Onsong County in North Hamgyong, a village in the northernmost part of North Korea close to the border, Park remembers clinging to his father as they swam the icy cold Tumen River into China. 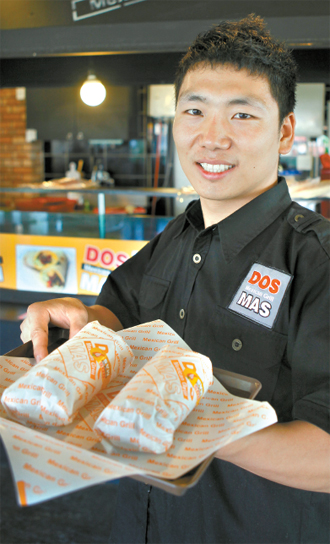 Park Gwang-ryong fled from North Korea at 10, arrived in Korea at 16, and has since become an entrepreneur.

Despite the dangers of leaving the North - from the freezing water and the North Korean soldiers - Park said defecting was a no-brainer for his family: “It was either stay and always be hungry, or risk it all, but with the chance that you may get to eat all you want.”

So the family of five - Park is the second of three boys - made their escape. From China, they made their way to Thailand and eventually to South Korea; all told, the journey took six years. Along the way, their father did not make it.

“There was a raid and dad tried to lure the cops away so we could escape,” explained Park coolly, with just a tinge of sadness in his eyes. “We live thinking that he’s probably dead.”

The real challenge began when Park and his family arrived in South Korea in 2003. At 16 years old, Park had to jump into the hypercompetitive South Korean school system.

“When I first went to a South Korean middle school, the workload was intense,” he said, recalling the school in the Bupyeong District of Incheon. “Sure, we had similar subjects [in the North], but everything was taught at a basic level. Things like algebra aren’t important when you spend most of your days looking for edible grass.”

But even more than the curriculum, Park, like so many other defectors, found the real challenge was relating to his peers.

“You wouldn’t think so, but language was a problem,” he said. “I understood everything that was said, but others had a hard time understanding what I was saying.”

Today, Park has a noticeable accent, but it has dulled into something like a mashup of Gangwon and Gyeongsan dialects - something he’s quite proud of.
“Older ladies love it when I put on the Na Hoon-a voice,” he boasted, referring to the famous trot singer.

Park said that the bluntness of North Korean mannerisms also was a hindrance to making Southern friends.

“The way we speak, it sounds harsh to South Koreans. Even when we were joking, South Korean kids thought we were threatening them,” he said.

After a year of lagging behind his peers, Park decided to enroll in the Great Vision School, a school only for young defectors.

“It was paradise for kids like us,” he said. 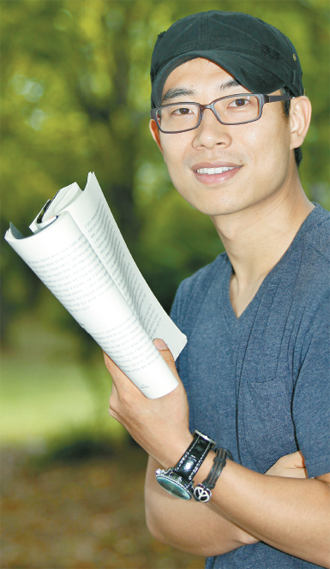 Choi Il-nam is determined to become a police officer, serving for a unified Korea.

Park explained that the support and love he received from the teachers there was what helped him find his footing in South Korean society.

Even so, it still took him seven years to pass his college entrance exam. But he kept studying, and finally passed the test last year while setting up his business.

Along the way, Park held all sorts of jobs, just trying to get by.

“Fish markets, selling kebabs at Home Plus outlets around the nation and a water rafting instructor, I’ve done it all,” he said.

Having opened a successful business, Park said he has notions of expanding by starting a second restaurant or two. But he knows all too well that he’s the exception rather than the rule.

“So many young defectors live without hope and don’t mount to much,” he said.

Today, having ambitions and hope are things he never imagined growing up.

“There are no such things as dreams in North Korea,” he said.

Like Park, there are a few North Koreans who thrive in the South. Another young man who has done well here is Choi Il-nam, having graduated recently from Dongguk University.

Soft-spoken and pensive, Choi had just returned from a human rights seminar in Cambodia when I met him.

He hails from the same town in the North as Park and is about the same age, but Choi’s story starts a little differently.

Choi grew up in a relatively well-to-do family and he never went hungry as a child, even though his father disappeared for 15 years. Then one day, his father contacted them through a broker.

“At the time we thought we’d just be going to China,” said Choi. “If I had known we were going to South Korea, I don’t know that I would have wanted to come.”

The South was a “symbol of evil,” he added.

Crossing the Tumen River, Choi still remembers how the cold water felt like a razor against his skin.

“I didn’t know that I could swim until that day. When you are in a sink-or-swim situation, you somehow figure out how,” he said.

During his year in China waiting for paperwork to be finalized, Choi spent most of that time watching Korean television shows and learning English. But when he finally made it to South Korea and started his first day of high school, he was still in for a shock.

Much as Park found, it was hard for Choi to understand the ways of Southerners, too.

“People in the South don’t exactly mean what they say,” he noted. “North Koreans are more direct, but South Koreans often are offended by that.”

Luckily for Choi, his athletic prowess worked wonders at his school.

“In North Korea, we are trained hard on playground pull-up bars. My classmates were impressed at what I could do,” he said.

Taking classes with students that were two years his junior was a humbling experience, but Choi learned that he needed to unlearn everything he had been taught in the North. He found Korean history particularly tough.

“Back home, the [northern-based] Goryeo Dynasty was praised, but in the South, the [southern-based] Silla and Joseon dynasties are regarded as the heydays of Korean history,” said Choi.

Choi thought a lot about what he wanted to do with his life.

“I wanted to go to the police university, but they didn’t take defectors,” he said.

So instead he studied police administration at Dongguk University, where he earned a scholarship.

Although he faced fresh challenges at the university, “getting reprimanded a lot, and beaten, too,” Choi said he was glad because he didn’t feel like an alien the way he did in high school.

While about 500 North Koreans attend university in the South these days - a rise caused by programs designed to help defectors - more than half are believed to drop out before graduating. For Choi, it took him seven years, but he did graduate this year, with internships at a radio station and at the Korea Finance Corporation.

Choi has a clear goal: to make it into the national police next year.

While both Park and Choi have found success in the South, they both say there are times when they want to go back, even just for a day.

“There are times when I miss everything about home,” said Choi, whose friends should just now be finishing their 10 years of mandatory military service. “I worry about them, I wonder how many have died and I think about seeing them one day.”

These days, though, it seems such a chance is far off.

But for now, there are dreams to pursue.

“My dream is to make enough money to buy a nice plot of land with a great view and build a house there,” said Choi, as well as “to be a police officer who works for the safety of the Korean Peninsula once the nation is reunified.”

While Park also wants reunification, his approach is slightly different. He wants to fund initiatives that will help reunification and help his fellow North Koreans adjust once the country is reunified “because they will need money.”

“In the South, money is important,” said Park. “You need it to be respected and also to help others, so I’m out to make a lot of money.”